Not far from the GTA, you'll find Waterford Ponds.  Read on to find out more about kayaking this hidden gem, which boasts several bodies of water, beautiful bridges, and great fishing!
​ 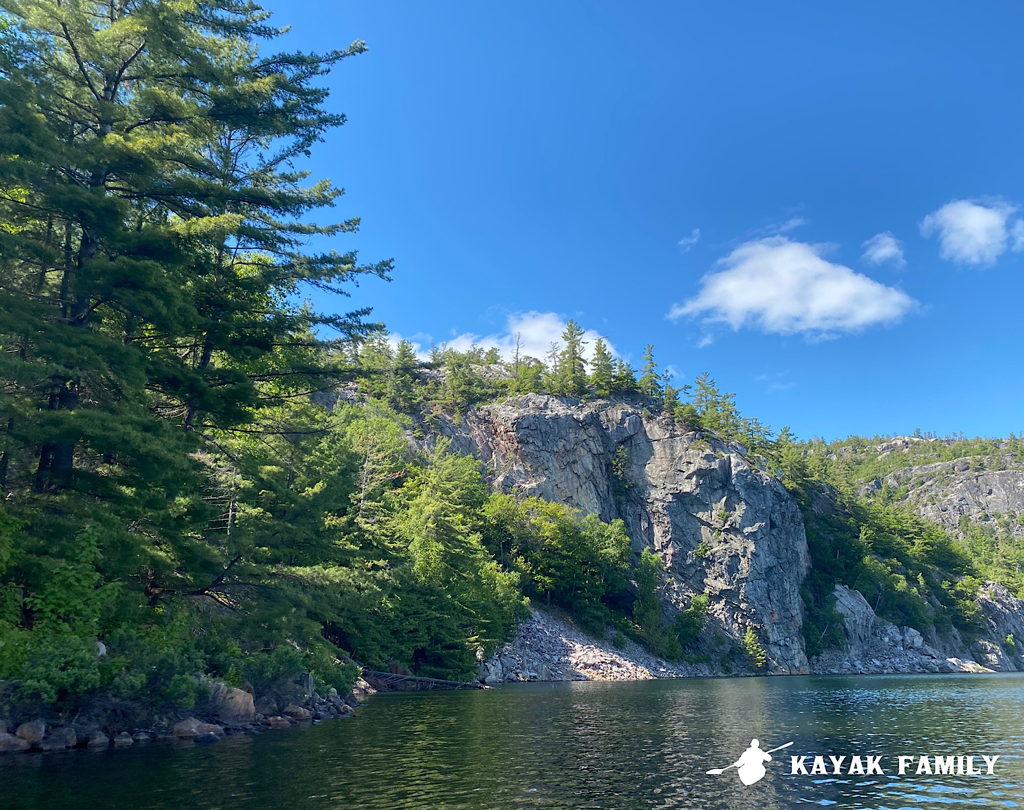 Our boys heading out from the launch on Shadow Lake. The lake is lined on the north side by private homes.

Put In / Take Out: 77 Alice St, Waterford, ON N0E 1Y0.
There is a public dock and a gravel launch ramp.  The parking lot is also used for accessing the Waterford Heritage Rail Trail, and is quite busy.  When we got there just after 10, the parking lot was already full, but we found parking along Alice Street just across from the Antique Market.  There are 3 or 4 other access points around the various ponds, so if you can't find a spot, you can head over to one of the other lots.
​​
Trip Length:  ​2-3 hours, approximately 8 km.  We kayaked the perimeter of 3 ponds, but you could lift your kayak over to additional ponds to extend your visit. 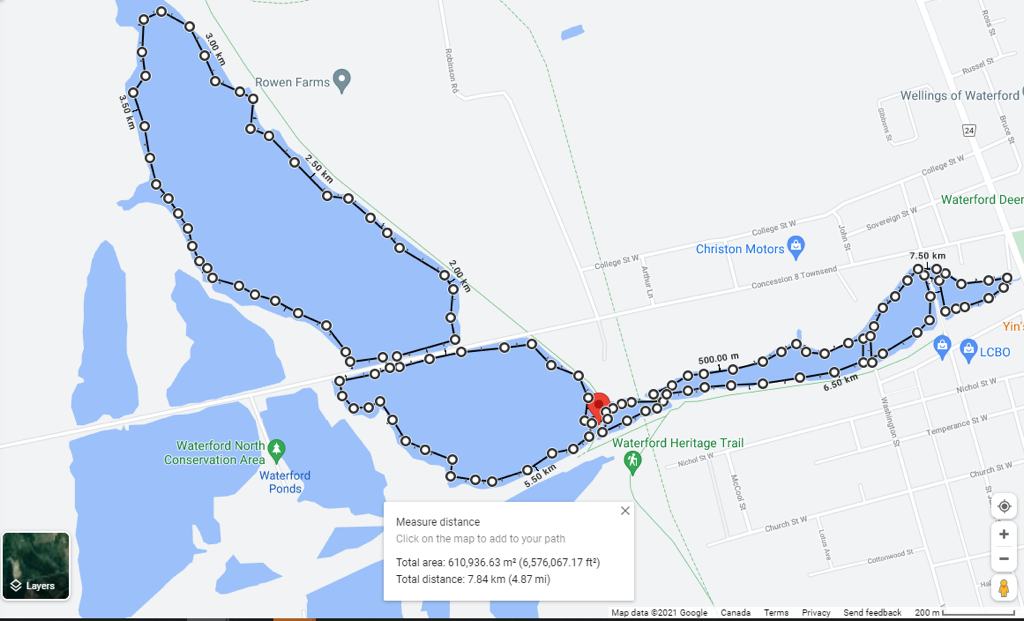 Cost:  There were no admission or launch fees.

Life jackets and all Transport Canada required safety gear are always a must.  Sunscreen and sun hats are definitely recommended when you're on the water.
​ 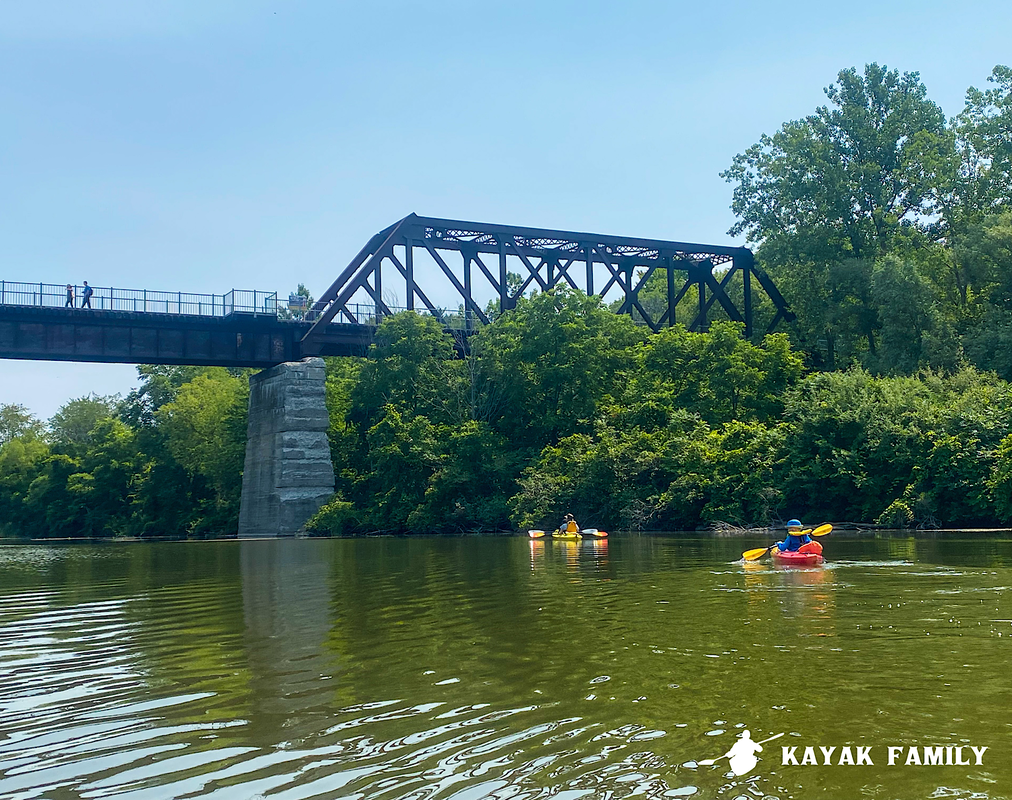 Passing under the old railway bridge, which has been converted to a pedestrian bridge for hiking and biking. 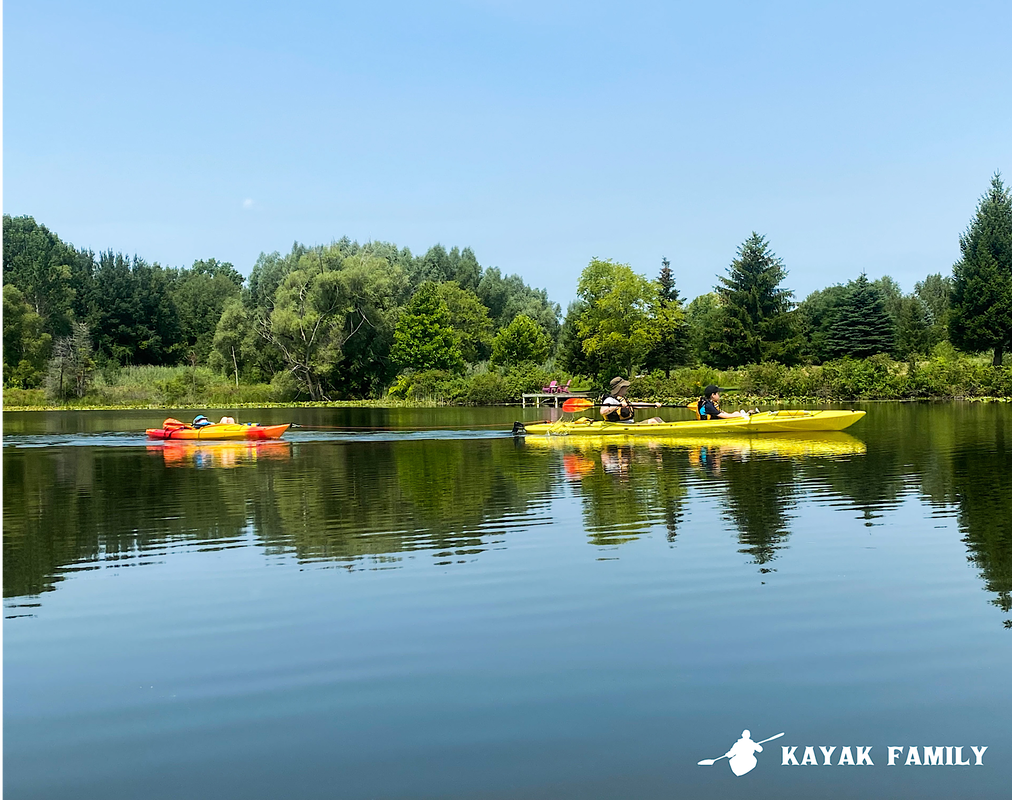 My husband and older son in The Beast, our tandem kayak, towing our younger son. It was a beautiful day and the reflections were perfect!
​We decided to check out the Waterford Ponds on the way to visit family in Norfolk County. It seemed like a good spot to drop the kayaks in for a couple of hours - if we got going early in the morning, we could still be at our final destination by early afternoon. Little did we realize when we set out - we could have definitely spent a few more hours kayaking the Waterford Ponds.

Each of the three ponds we put the kayaks in was a bit unique. We saw a variety of birds, including Great Blue Herons, a green heron, several belted kingfishers, a few Eastern kingbirds, and lots of red wing black birds. 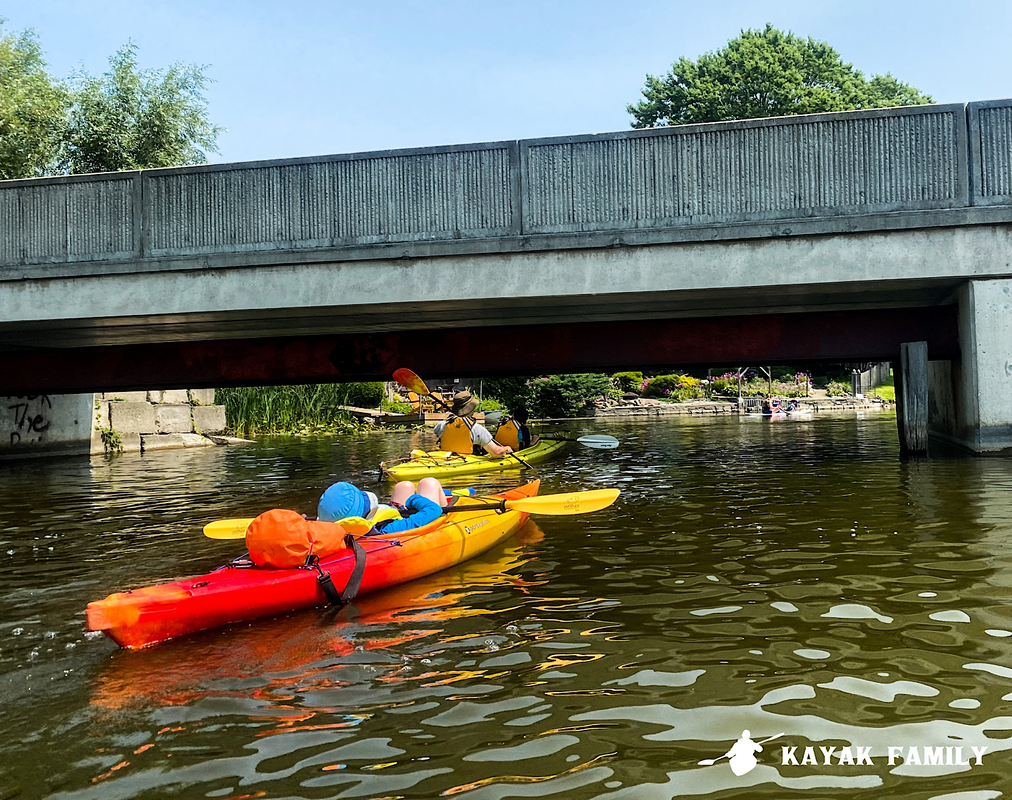 Heading under a low bridge. Lots of pretty properties line the north side, while there is a public picnic spot on the south side of this area of the pond.
While close to Hamilton and Kitchener/ Waterloo, this seems to be a lesser known paddling destination. The ponds only allow boats with engines up to 9.9 HP, and we saw only a couple of boats with engines - they were parked with people fishing off of them. While we saw several fish jumping, we heard from people in kayaks and boats, as well as people fishing from the shores that nothing was biting the morning we were there.

With a population of approximately 3,000, Waterford is a small town in Norfolk County. The town was the terminus of 3 separate rail lines, but as the railroads pulled up their lines, the town revitalized their waterfront and rail beds for recreational hiking, biking, fishing, and paddling. 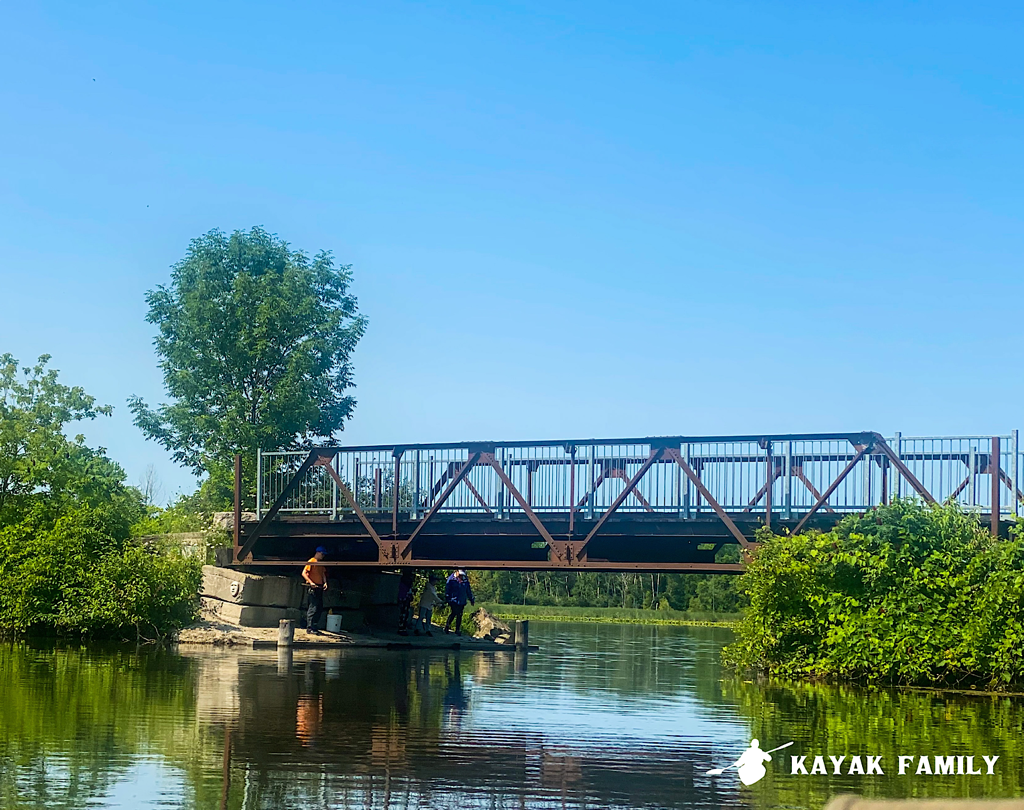 We passed under a lower bridge, where people were fishing from the shore. We saw lots of people fishing on the pond.
​Shadow Lake is lined on the north side by several private properties that back onto the lake, while the Waterford Heritage Trail (part of the Trans-Canada Trail) runs along the south side. We launched at the dock near the trail head, but as we kayaked around, we discovered several other great spots that can be used to launch, and additional parking lots, including one just off of the North Side of Concession 8. 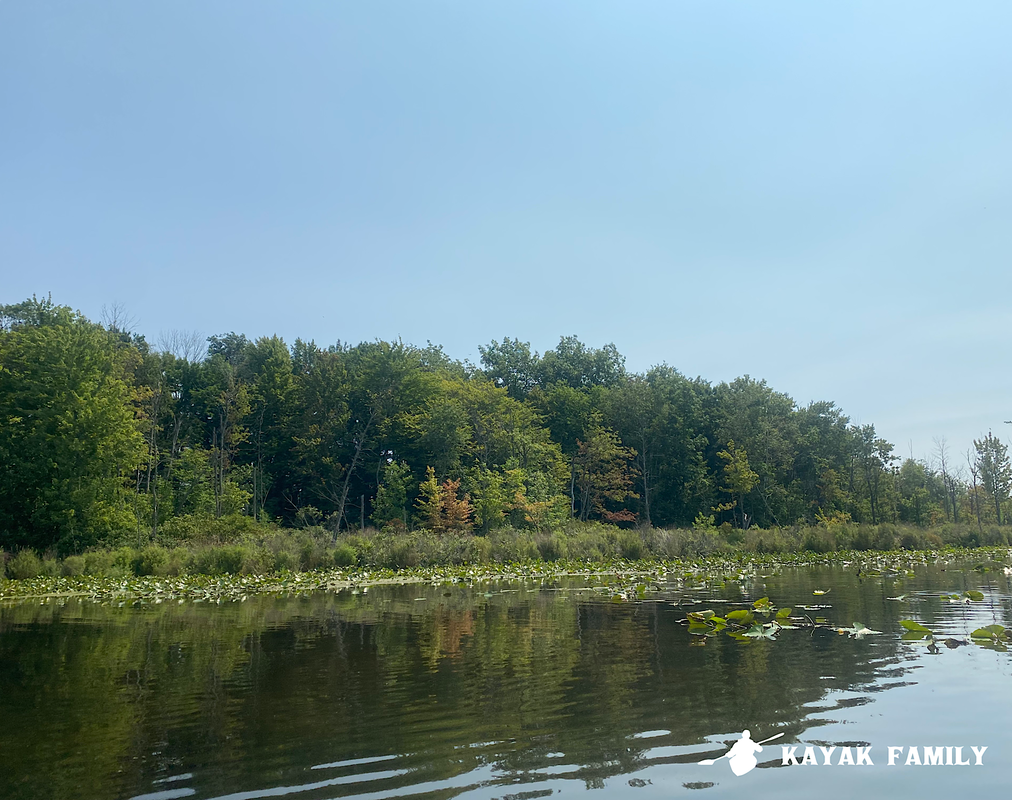 The North Pond was surrounded by a mixture of mature trees, and was covered in beautiful water lilies.
​When we hit the water around 10:30 on a sunny Saturday afternoon in late July, it was fairly quiet. There were several paddle boarders coming in from a lesson, but just a few other kayaks on Shadow Lake. There were some small fishing boats and canoes and fishing kayaks on the other two ponds (and several more people fishing from the shores!), but it was relatively quiet on these calm lakes. We heard that the ponds are stocked with fish, and it is apparently a popular fishing spot, although everyone we saw was saying they weren't catching anything. 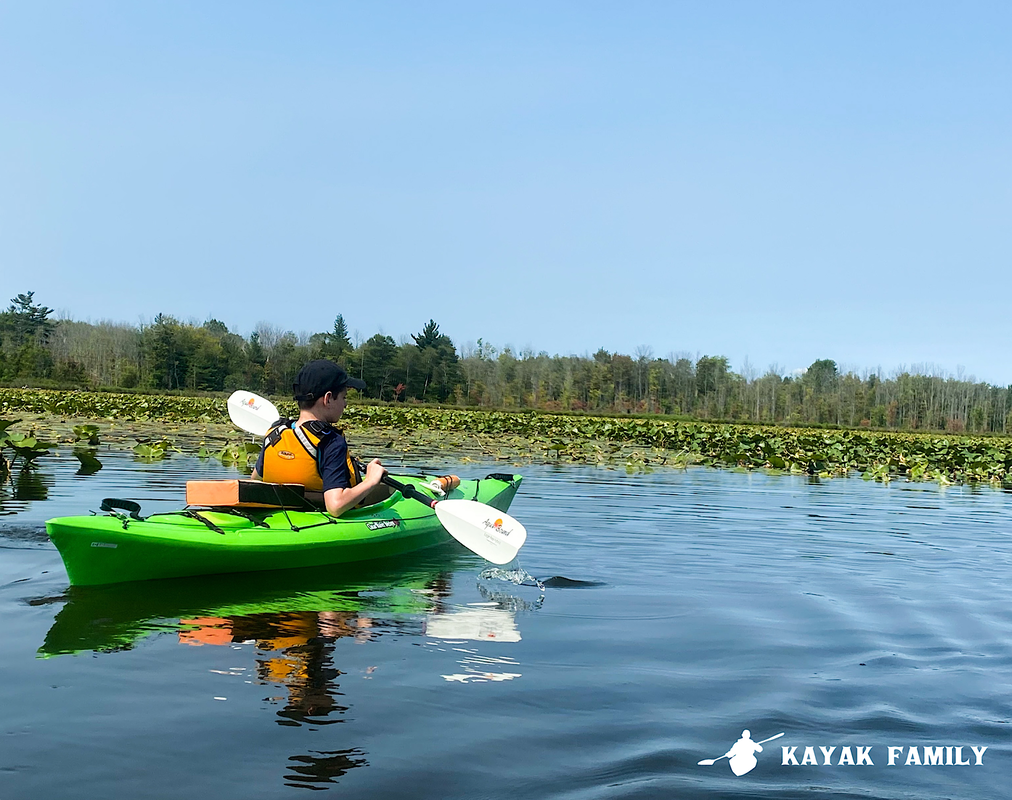 The ponds were covered with water lilies. The water was so clear.
The Waterford Ponds are several small bodies of water, including several that are rehabilitated quarry sites. Some of the ponds are connected by culverts and low bridges (most are too low to pass under!!), but most are separated by rural roads and narrow land dividers that require portages to move between. We kayaked Shadow Lake, the long skinny pond that runs along Alice Street, as well as the next pond, and the largest pond to the north of Concession 8.
​ 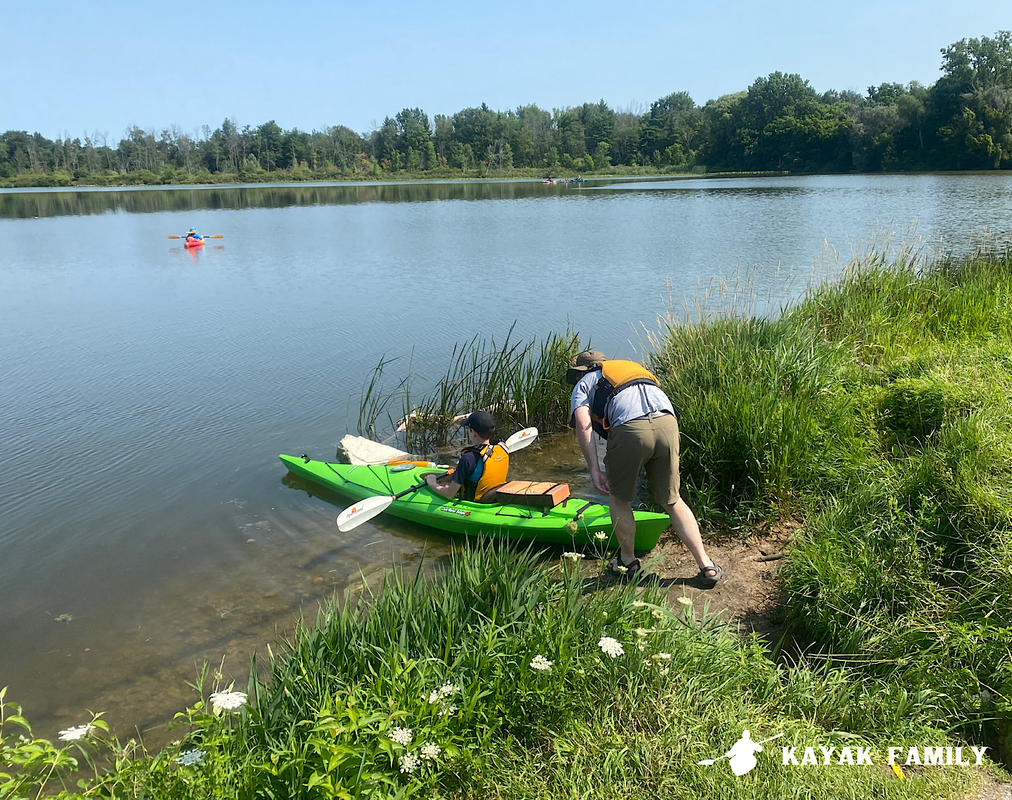 Launching onto the North Pond involved carrying the kayaks across Concession 8. this was quite a large pond and it was not very busy. 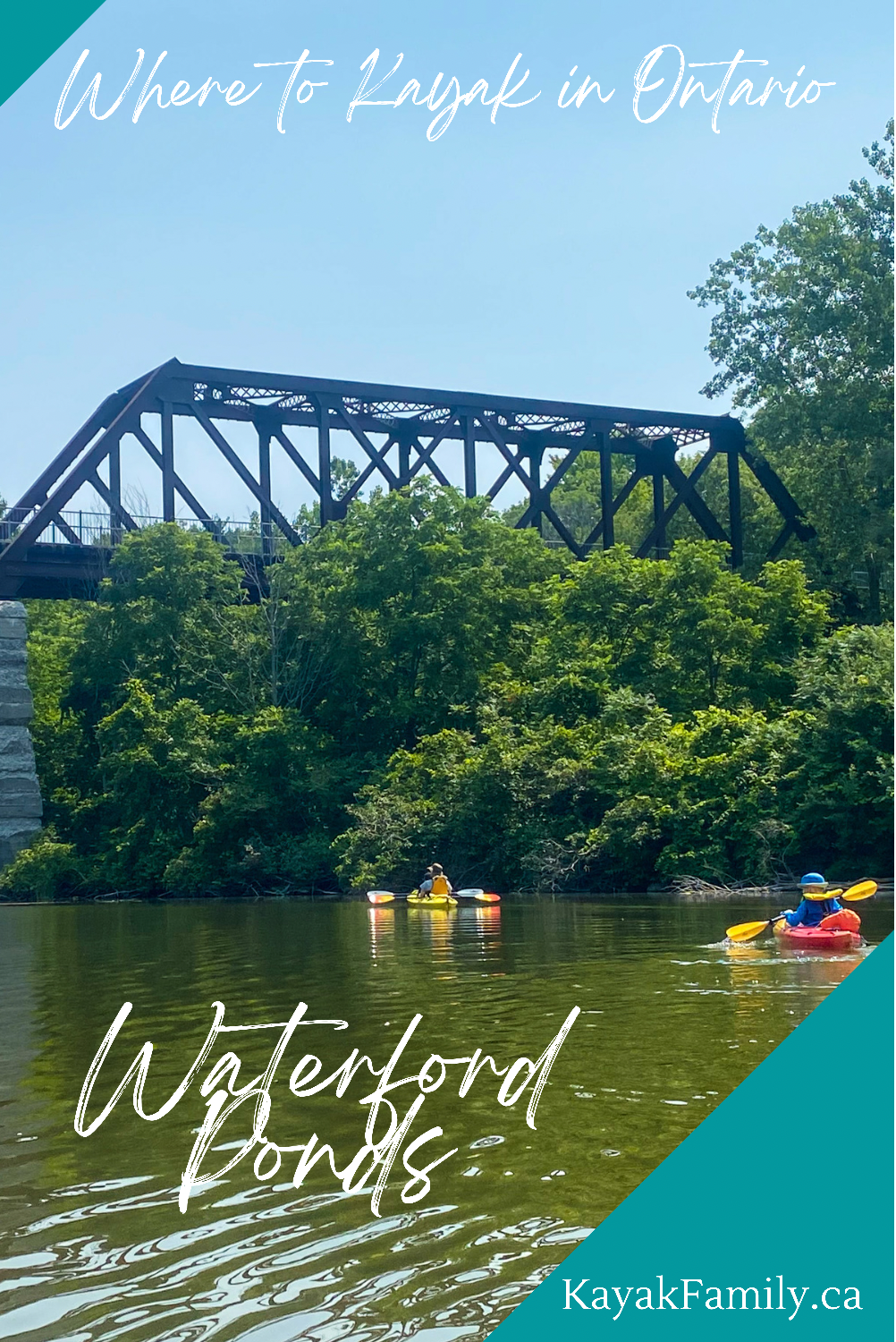 Norfolk Pathways - watch a video from about the creation of the Waterford Heritage Trail and the revitalization of Shadow Lake.
​