A pretty stretch of the Grand River winds through rural Ontario, stopping at the last standing covered bridge in Ontario, located in West Montrose, where Mennonite families still use horses and buggies. 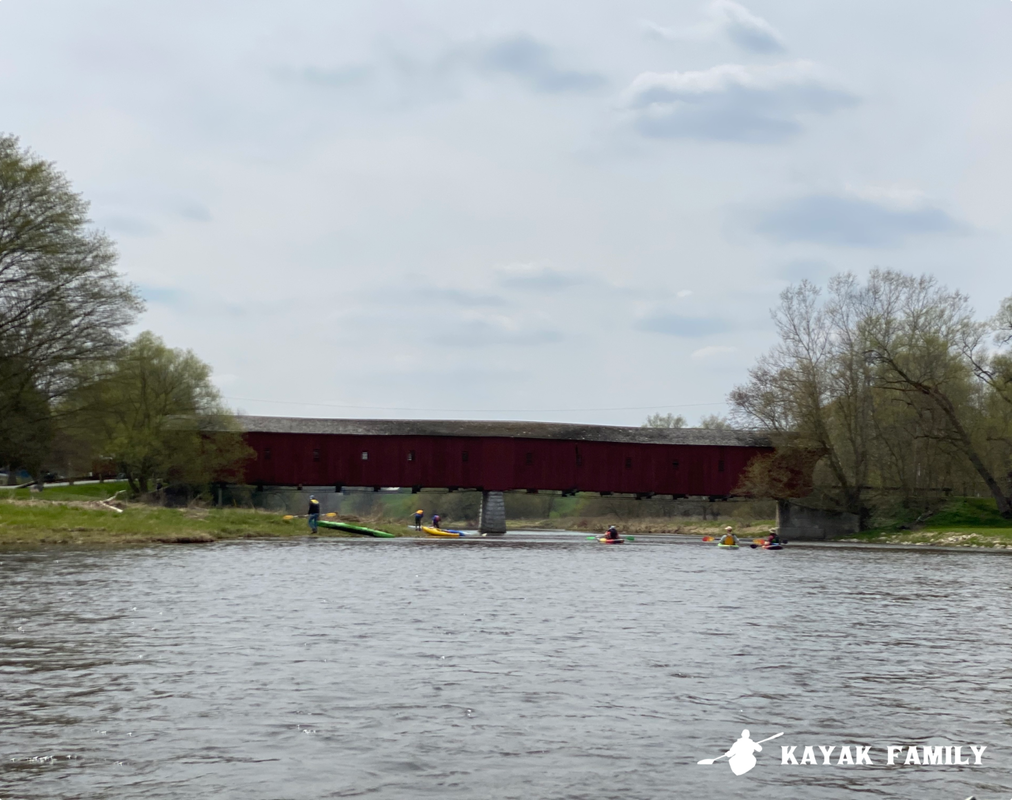 Please note that this section of the Grand River is shallow and fairly slow moving, and so is impassible by kayak for most of the year, except for early spring. If you are looking for a paddle destination in the summer or fall, we would suggest some of the other stretches of the Grand instead.


Put In: Wilson Flats , 6285 8 Line W, West Montrose, ON. N0B 2V0. The launch is a gravel bank on the side of the river, and is easy to access. There is a large parking lot with room for trailers, and even kayak racks on site. This is definitely one of the nicest launch areas we've seen! 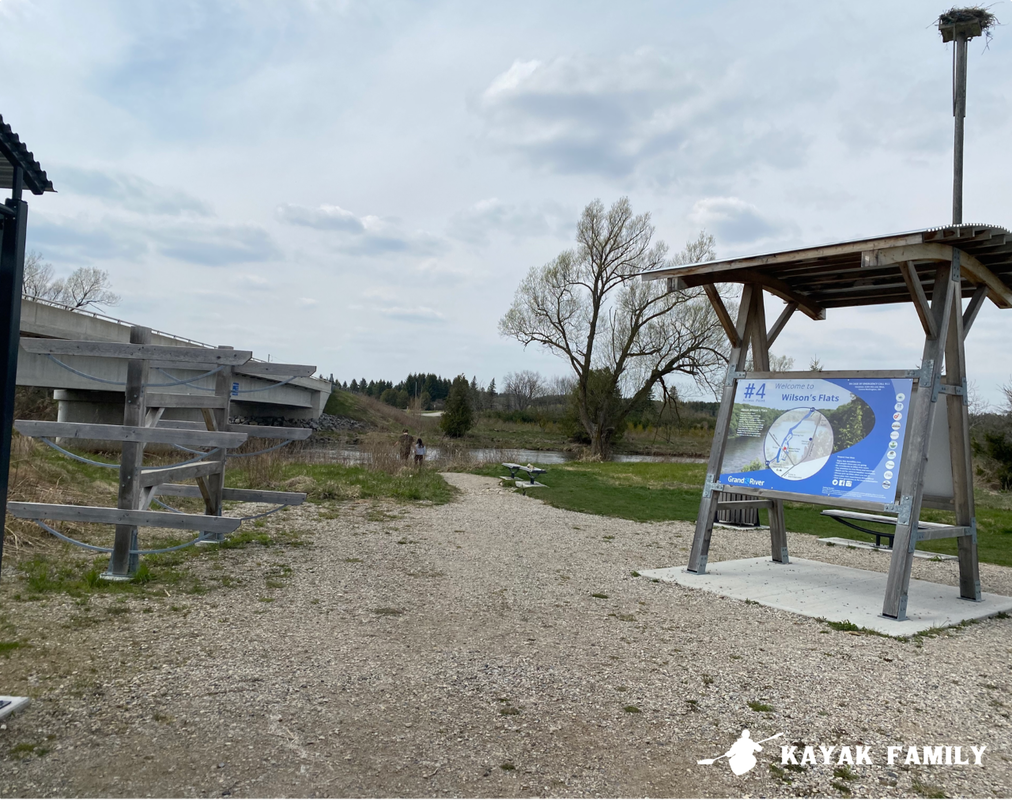 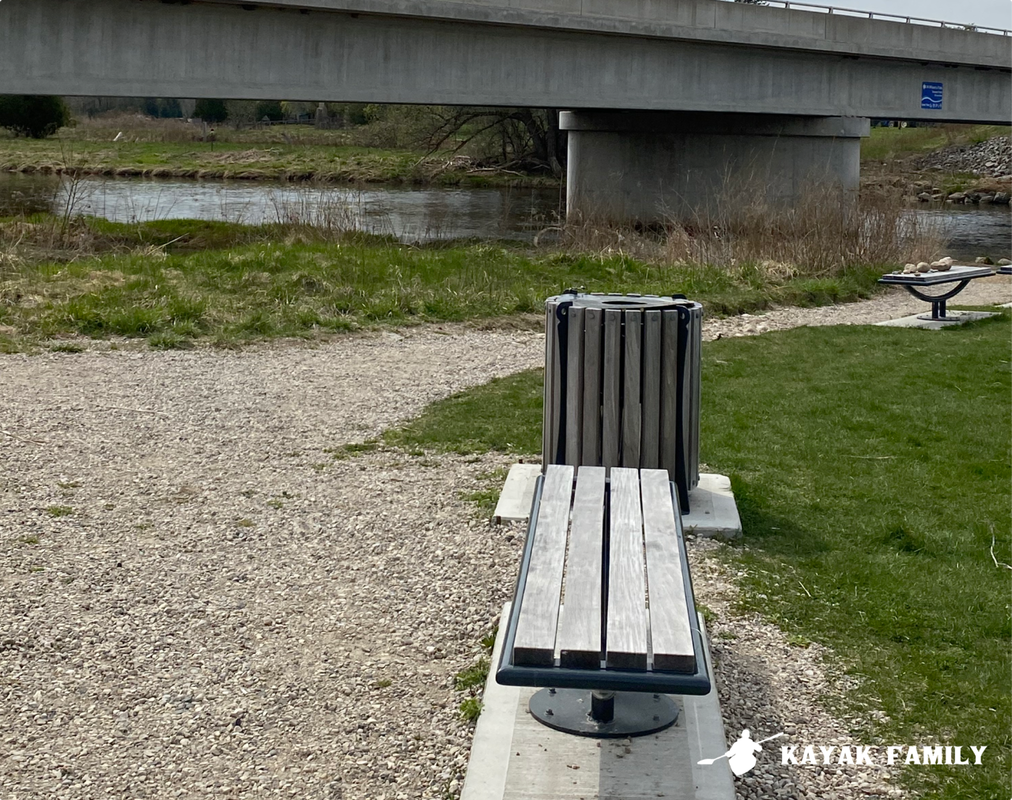 Wilson Flats launch point on the Grand River - beautiful set-up
Take Out: immediately under the West Montrose Covered Bridge on the left side of the river. Please note that the surrounding open lands are privately owned, and stick to the area that isn't marked as private when exiting the river. There is a picnic area and parking lot across the road (River's Edge Drive). 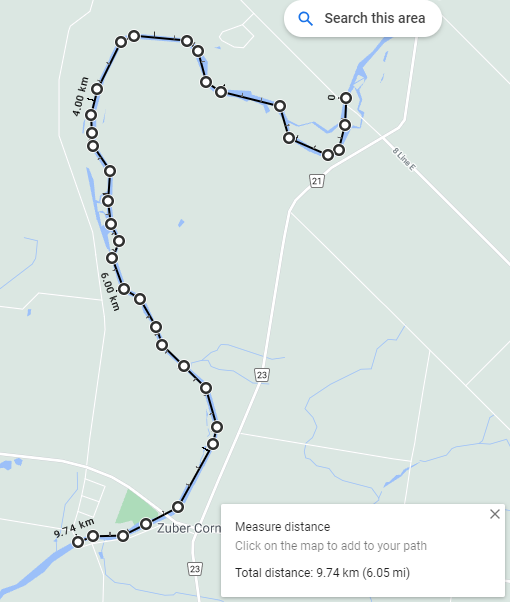 Shuttle Required: Like most river routes, this stretch of the Grand River requires a shuttle, as you are unable to paddle back upstream. You'll need to arrange to leave a car or bike at the put in and at the end. We drove the trailer down to West Montrose, then returned with the second car to begin our paddle. When we finished the trip, we loaded the kayaks on the trailer and then went ack to pick up the car.

Cost: There were no admission or launch fees.

Degree of Difficulty: Intermediate (while the launch and river are fairly straight forward and there are no swift moving spots, there are shallow sections which may require you to get out of your kayak. Water temperatures in the spring are cold, so you need to be able to re-board in moving water quickly. Please read more below in the Gear Recommendations section and use caution if you decide to paddle this section of the Grand. 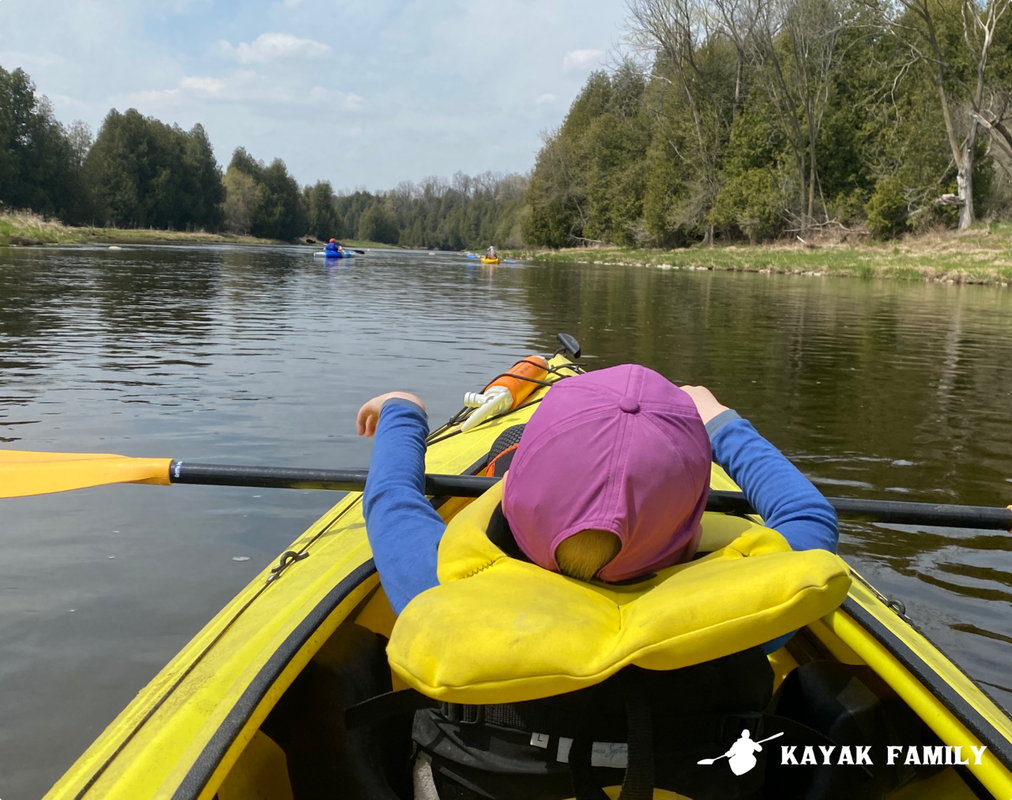 Life jackets and all Transport Canada required safety gear are always a must.  Sunscreen and sun hats are definitely recommended when you're on the water.

Be sure to dress for the water temperatures, not the air temperatures, when paddling in the early spring.  Immersion, even for short periods, can be dangerous.  A change of dry clothes in a dry bag is a good extra to bring along right in your kayak.

​A throw rope and and extra paddle are always recommended for paddling on moving rivers.
​ 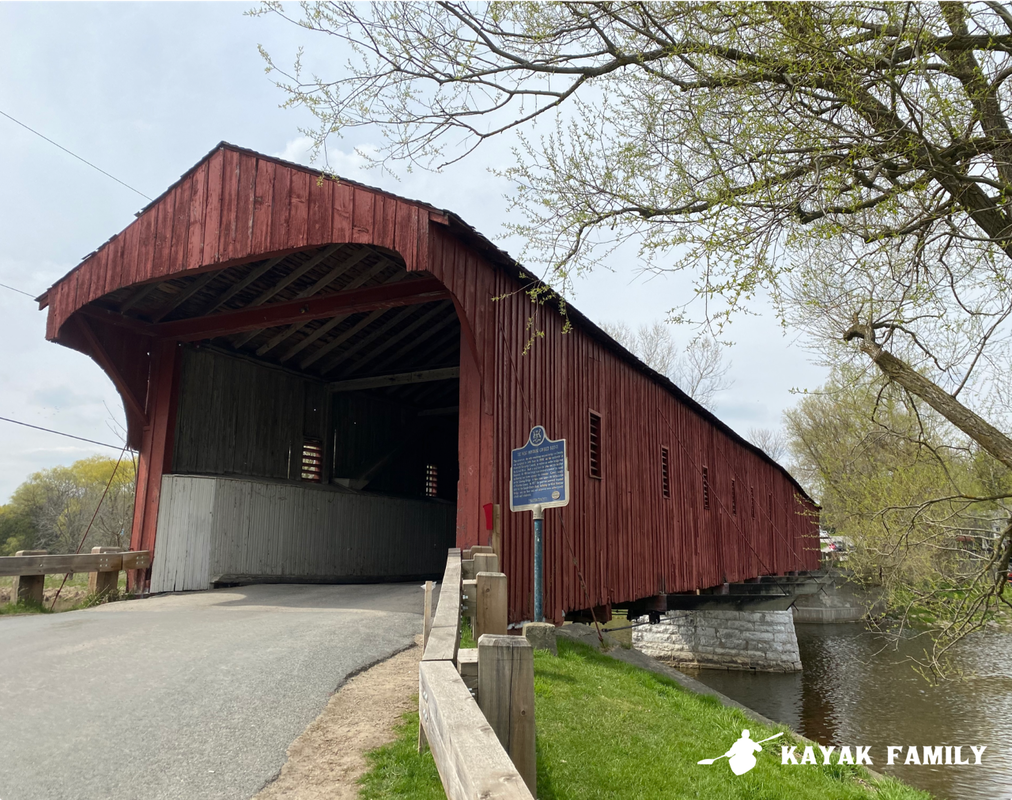 West Montrose Covered Bridge, the last standing covered bridge in Ontario
Deep in Mennonite country, and still frequented by horses and buggies, the West Montrose Covered Bridge is a unique piece of local history in Waterloo County.  Known to locals as "The Kissing Bridge", it's said that early horse and buggy drivers would sneak a kiss while driving through the covered bridge.  Now a Provincial Historical Site and on the Canadian Register of Historic Places, this 200 foot span, which was built in 1880, is the last standing covered bridge in Ontario.

Approaching the bridge from the river provides a unique perspective of this structure.  After we had loaded the kayaks up, we drove across the bridge, where there was a small Mennonite-owned general store that sold ice cream and baking (cash only!)
​

Spring on the Grand 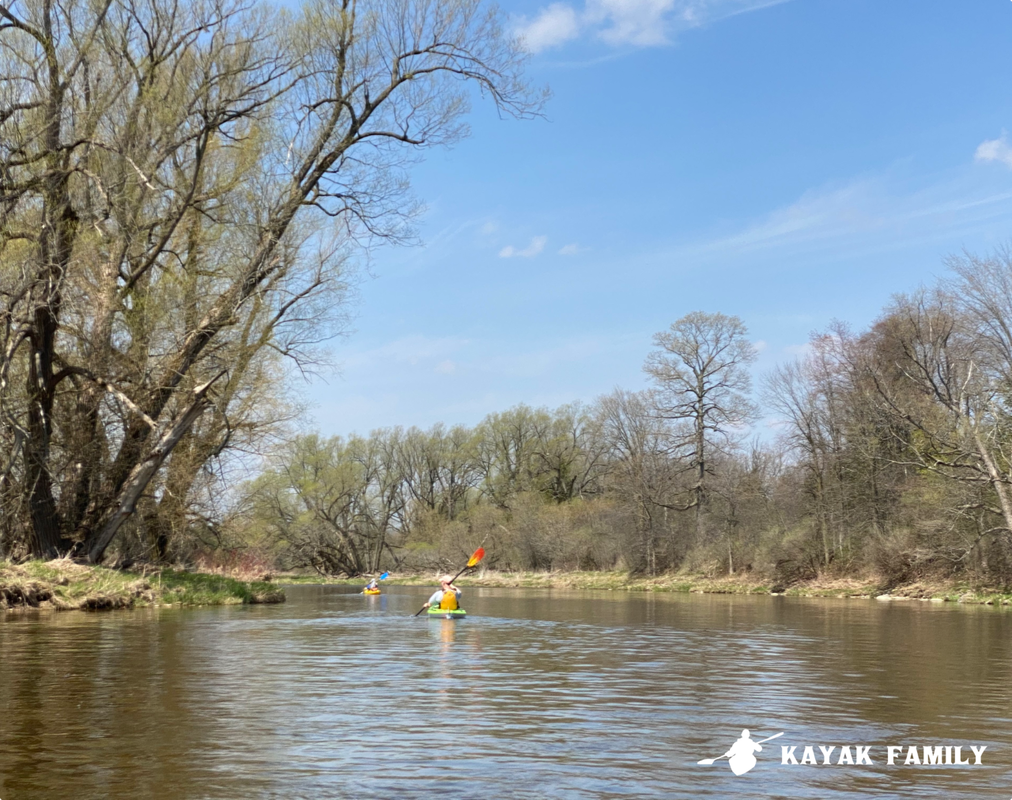 The Grand was just starting to green up on a beautiful day in April
The Grand River is one of Canada's Heritage Rivers, and any day on the Grand is a great day.  With the sun shining, the trees still in the bud stage, and the grass just starting to green up, our trip in late April was definitely a beautiful reminder of the beauty of spring and this was a wonderful first trip for the season.  Migratory birds were already back along the river, and the water was sparkling clean and bright.

There was an active osprey nest at the launch point at Wilson Flats, and we saw several more osprey as well as some turkey vultures soaring above the river on our paddle down.  We also were treated to the noisy rattling noise of belted kingfishers as they swooped close to the river, and many red-winged black birds.  There were several spots where we came across people fishing from the river - everyone was wanting to enjoy the beautiful day! 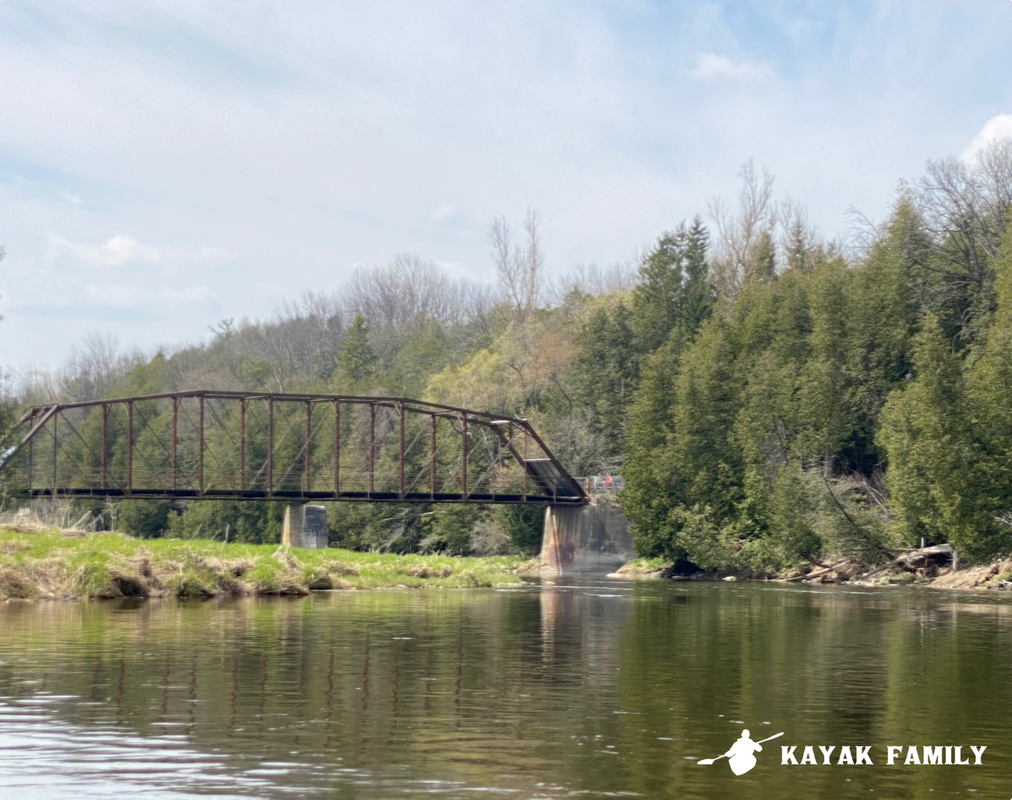 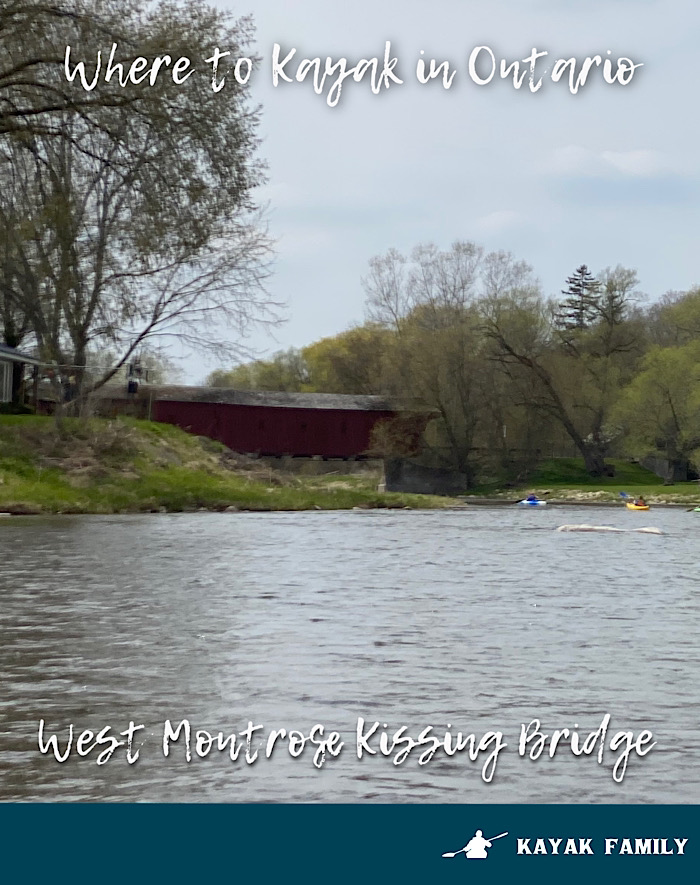