Mazinaw Lake is the biggest of 8 lakes found in 20,000 acre Bon Echo Provincial Park, and a must-do paddle! The stunning cliffs and large site of indigenous pictographs are one of the main attractions for this beautiful park. Read on for more information about launching and what to expect. 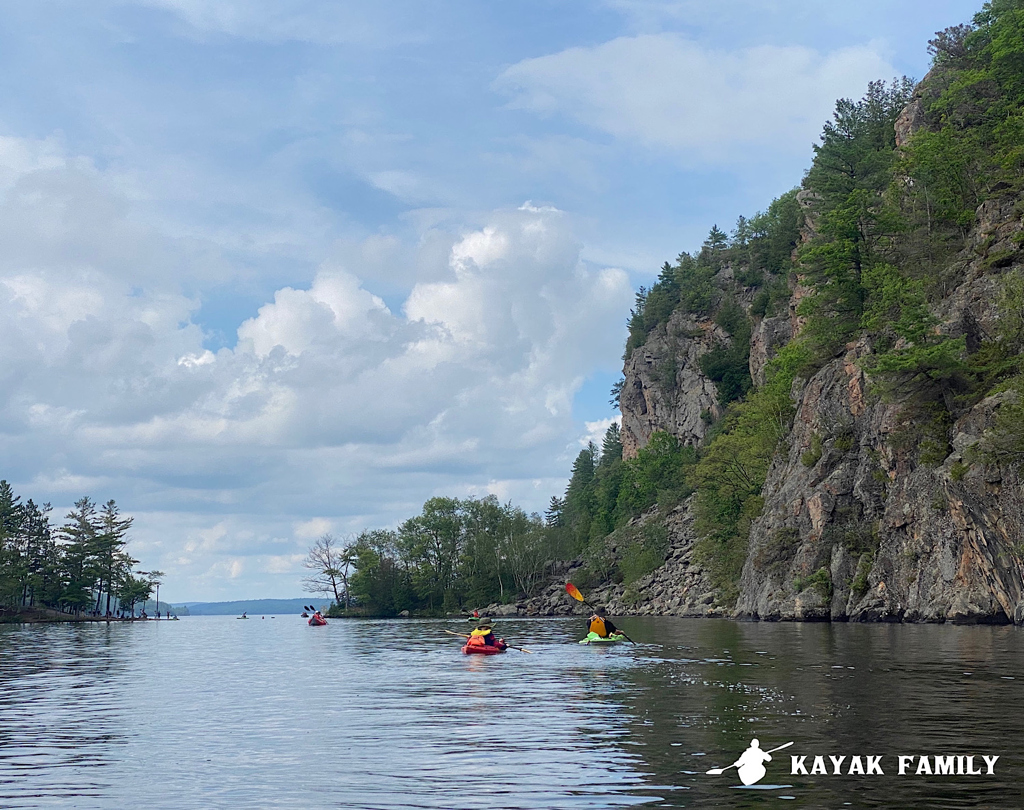 Put In / Take Out:
To access Mazinaw Lake from the main park entrance, follow the road past the Midway Campground.  There is a large parking lot across from the stairs down to the main beach.  You'll need to carry your kayak and gear from the parking lot to the beach (approximately 100m).
Trip Length:  14 km (4+ hours).  As long as you'd like it to be!  Upper and Lower Mazinaw lakes are the biggest lakes in Bon Echo.  We did 14 km, and were barely scraping the surface of these two water bodies.  Add hiking to your paddle plan - in addition to kayaking, you have the opportunity to tie your kayak to the dock on the other side of Lower Mazinaw Lake to hike up to the top of the Mazinaw Rock lookout on the Cliff Top Trail, a 1.5km trek up a series of stairs and scrambles (the trailhead is only accessible by water). 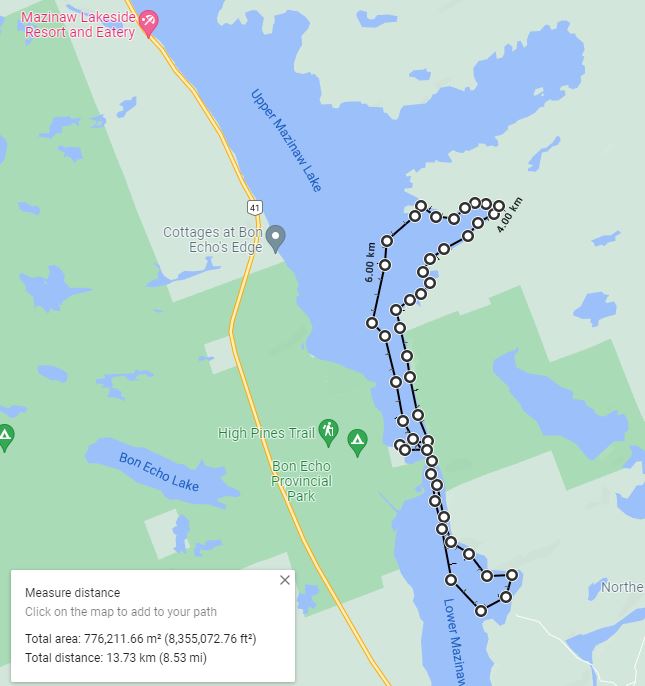 
Degree of Difficulty: Beginner friendly, especially if you stay in the area close to the cliff and the narrows.  Venturing out into the bigger open water may be more challenging depending on weather conditions but you know your abilities best! 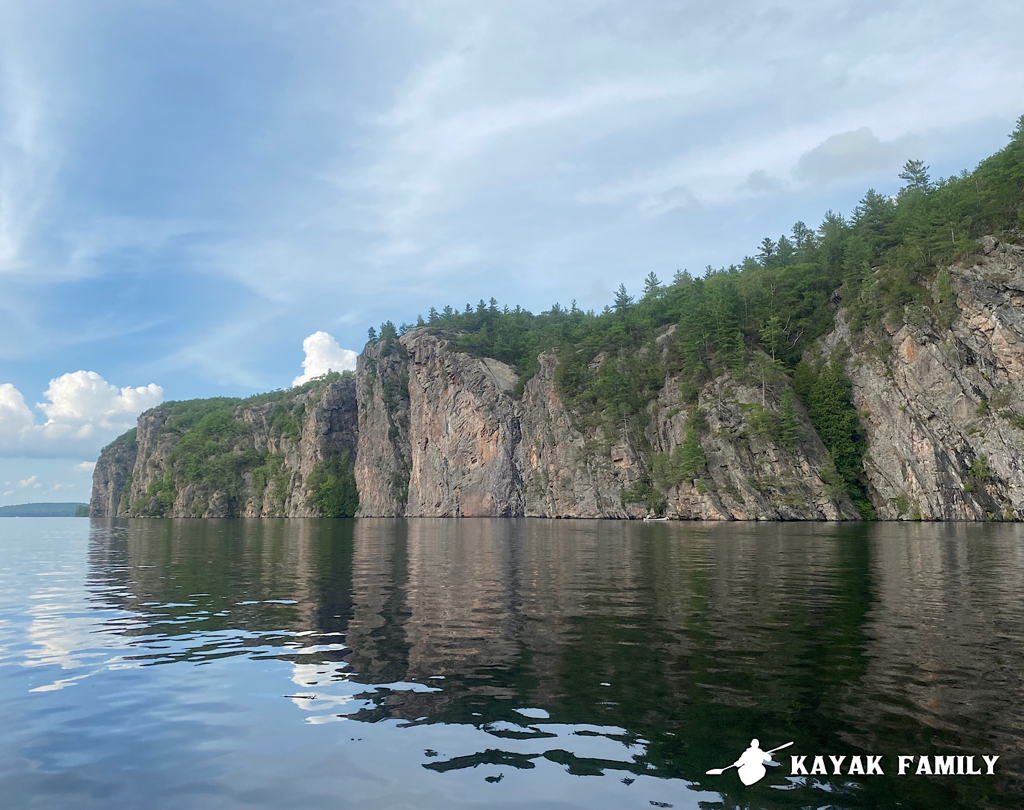 In more recent history, Bon Echo was a gathering place for artists including the Group of Seven, and these cliffs feature prominently in many of their paintings. 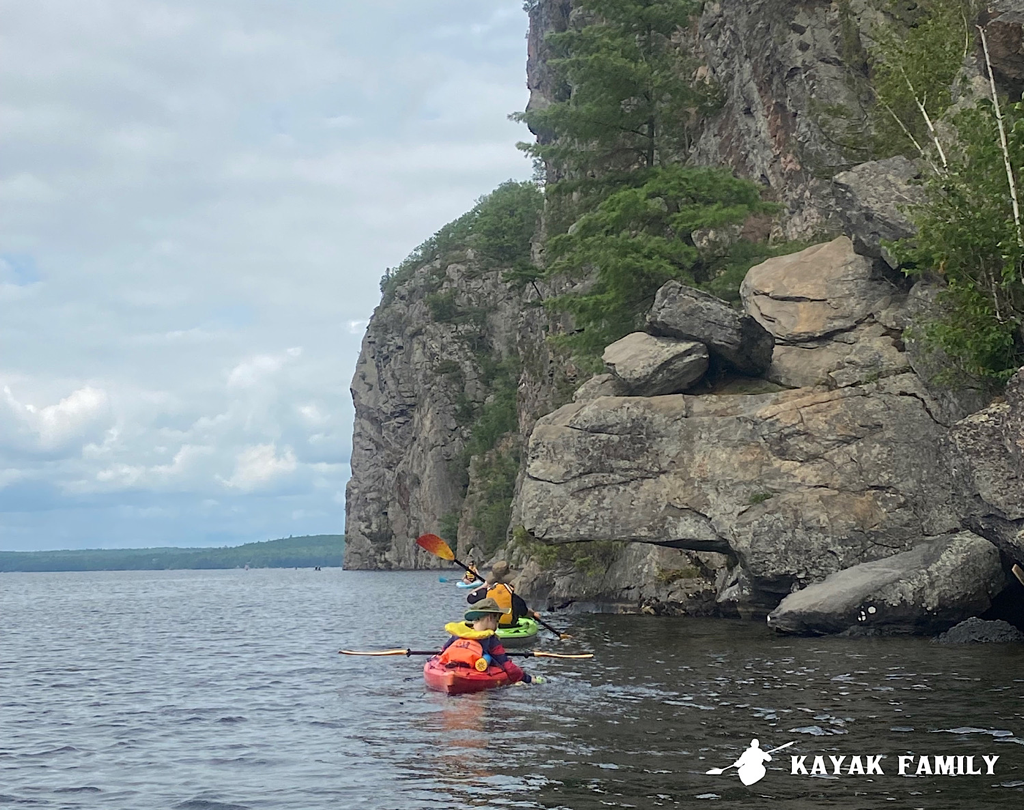 There's no time to be bored in a world as beautiful as this.

Bon Echo Provincial Park is one of our favorite park experiences.  We've been twice, and we're absolutely going back again (and again and again...)  Whenever we talk about favorite spots we've kayaked, Bon Echo is always in our Top 3.

If you're going to Bon Echo, you absolutely need to paddle the Mazinaw Lakes to view one of Canada's largest visible collections of Indigenous pictographs and hike to the top of the Cliff Top Trail, but don't stop there - as much as we love the Mazinaw Lakes, my husband adores Joeperry Lake, and I think that the smaller, more intimate Bon Echo Lake is pretty special too!

Mazinaw is the Algonquin word meaning "picture" or "writing", and the site now known as Bon Echo is believed to be place of great spiritual significance to Canada's Indigenous peoples.  Bon Echo is home to more than 260 pictographs, and this site represent the only pictograph site in southern Ontario.  The pictographs, painted along the base of these 330 foot high cliffs, are spread out over a 2.5km stretch along the cliff face at the confluence of the Upper and Lower Mazinaw Lakes and are visible only from the water, where they are at eye level from the cockpit of your kayak or canoe. 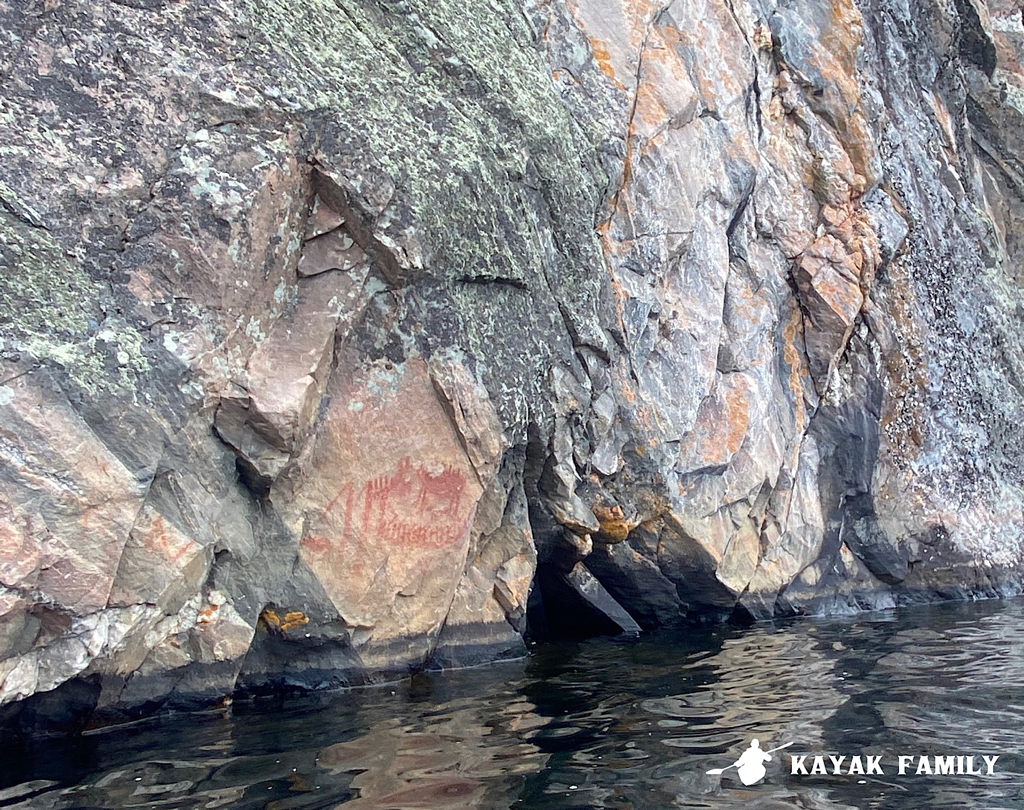 ​Sitting in a small boat alongside the pictographs, one can't help but feel small next to the immensity of the quartz cliff walls and the deep dark expanses of Mazinaw Lake.  It was a deeply contemplative experience to observe the pictographs and to realize that while the world kept moving, in this small piece of it, I was experiencing a view that had not changed at all in a at least a thousand years.  I found an article by the Historic Places of Canada website (linked below in Additional Reading) fascinating and informative.  They say there is little evidence in the area of permanent long-term Indigenous settlement or habitation; that the area surrounding current day Bon Echo was only used seasonally.  The site was visited by various Indigenous groups and is believed to have changed hands over the course of centuries.  The site was initially used by Algonquin-speaking people like the Cree and Ojibwa.  They were then driven out by Iroquoian peoples such as the Wyandot (Huron), Erie, Oneida, and Neutral, before being recaptured by the Ojibwa and other Algonquin nations.

The paintings, made hundreds or possibly thousands, of years before European settlers came to North America, are made from Hematite (a form of iron ore that was mixed with water and would become baked onto the rocks), and feature humans and animals.  One has to wonder at the stories behind those paintings, and whether those that painted them knew that they would still be there a thousand years later.

One of the most popular hiking trails in Bon Echo Provincial Park is the Cliff Top Trail, which is accessible only by water.  To access the Cliff Top Trail head, you can dock your kayak on the Parks Ontario dock located in Lower Mazinaw Lake (see photo below) - you'll need to bring a tie rope yourself, and the dock can be quite busy during the day. 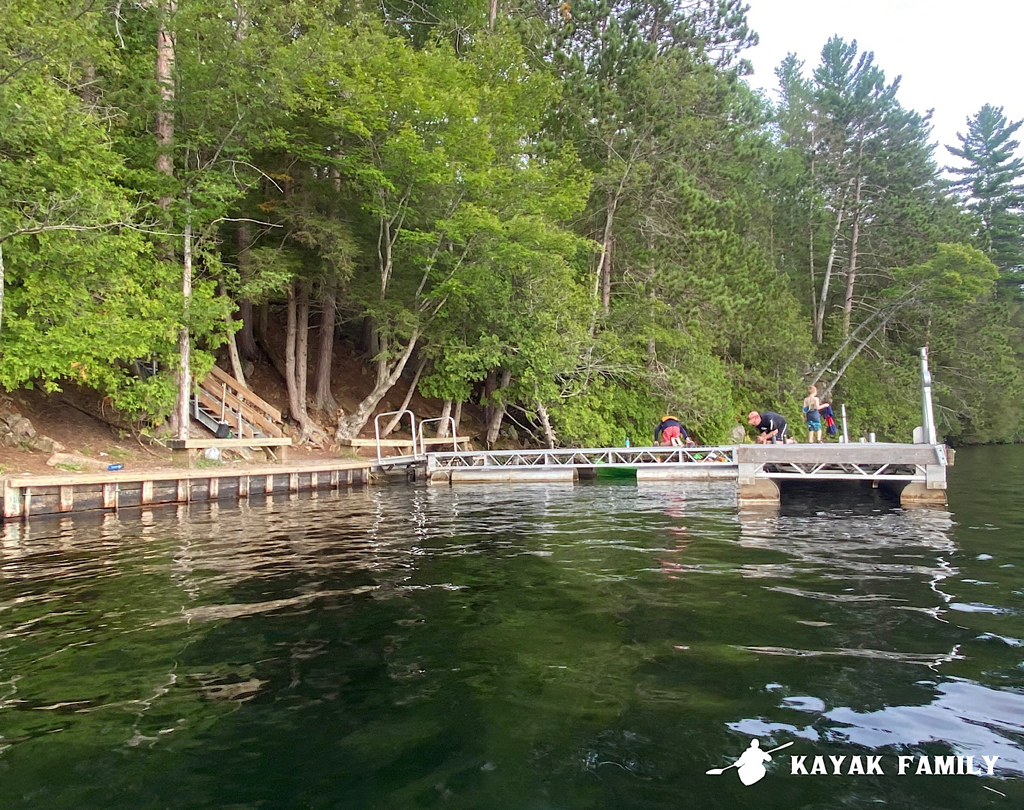 This trail, which is 1.5 km, is rated by Parks Canada as moderate to difficult.  It follows stairs and a pathway to the top of Mazinaw Rock, with 3 observation decks overlooking the lake.  Below is a photo of one of the observation decks, with Lower Mazinaw Lake in the background.  It's a great spot to get a feel for the enormity of the two lakes and the beauty of this provincial park. 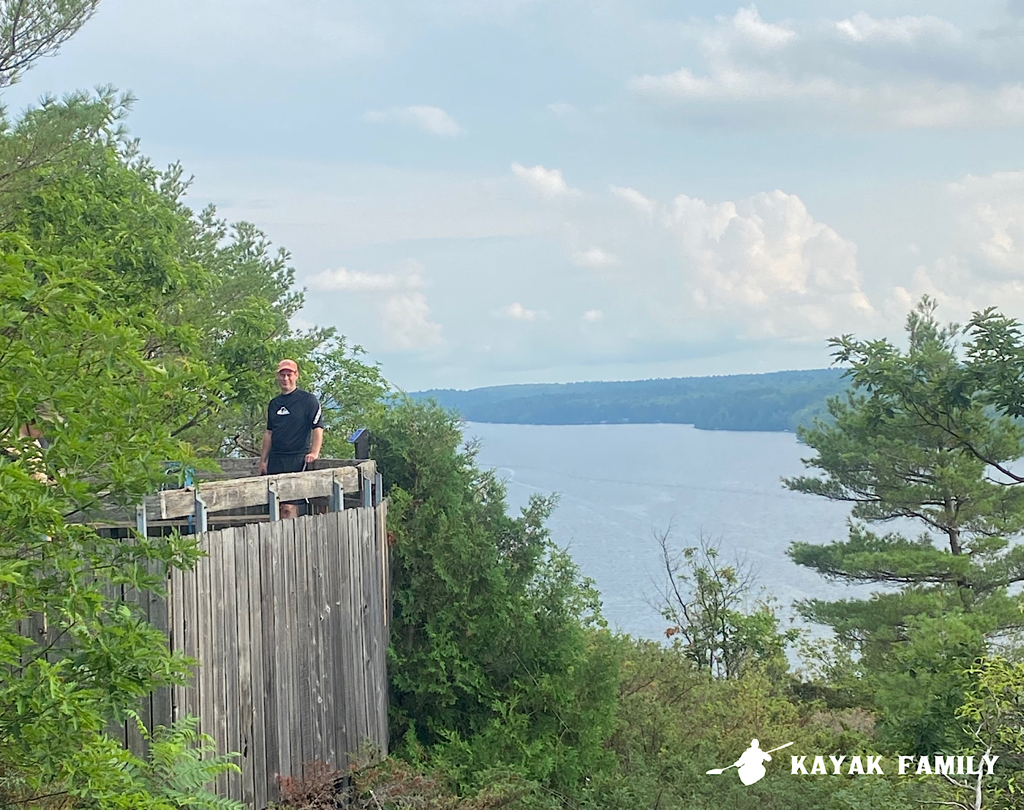 After a day full of paddling and exploring, we returned to the main beach at Upper Mazinaw to load our kayaks back up and return to our campsite.  We camped in Hardwood Hills Campground and loved the spacious sites (though it was quite far removed from the Main Beach, so if you only have time to do one lake, you may want to choose one of the campgrounds closer to Mazinaw Lake.) 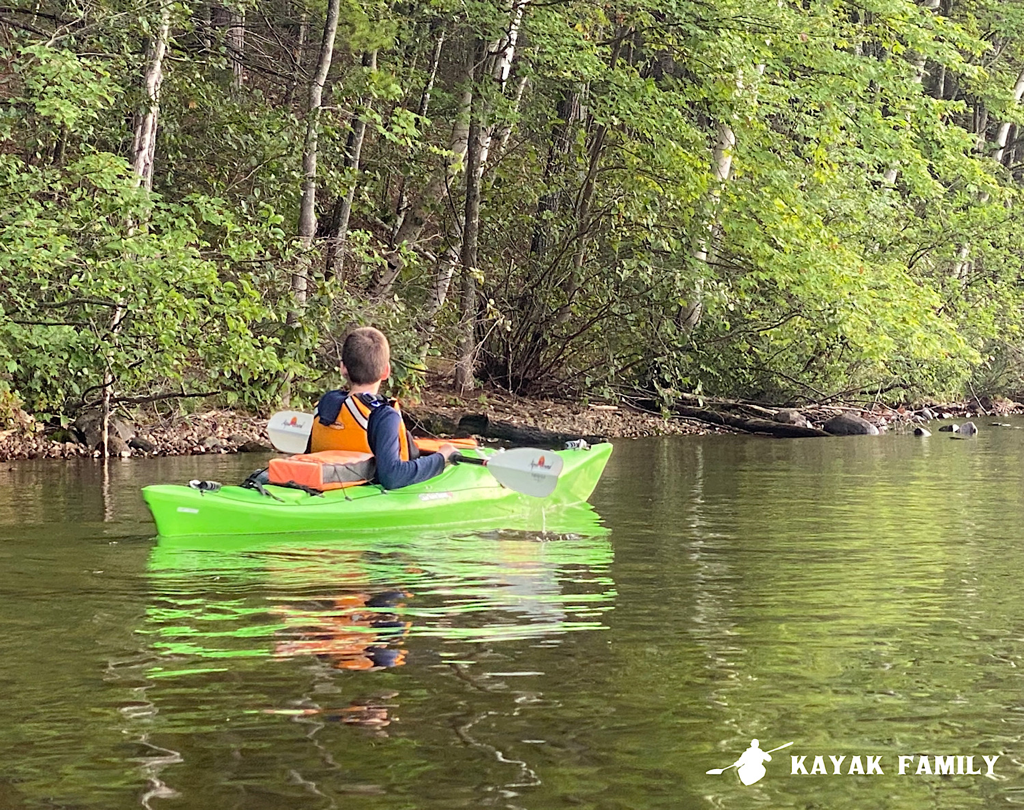 We haven't tried it yet, but if you're feeling adventurous and have more stamina than our 8 year old (and me too!) you may also want to check out the Kishkebus Route, a 21km route, with several portages that loop around from Lower Mazinaw Lake and back to Upper Mazinaw Lake, exploring Semicircle Lake, Shabomeka Lake, and Kishkebus Lake along the way.  The final portage from Kishkebus back to Upper Mazinaw is a grueling 1.5km, but you also have the option to back track with more paddling but only a couple of very short portages to tackle. 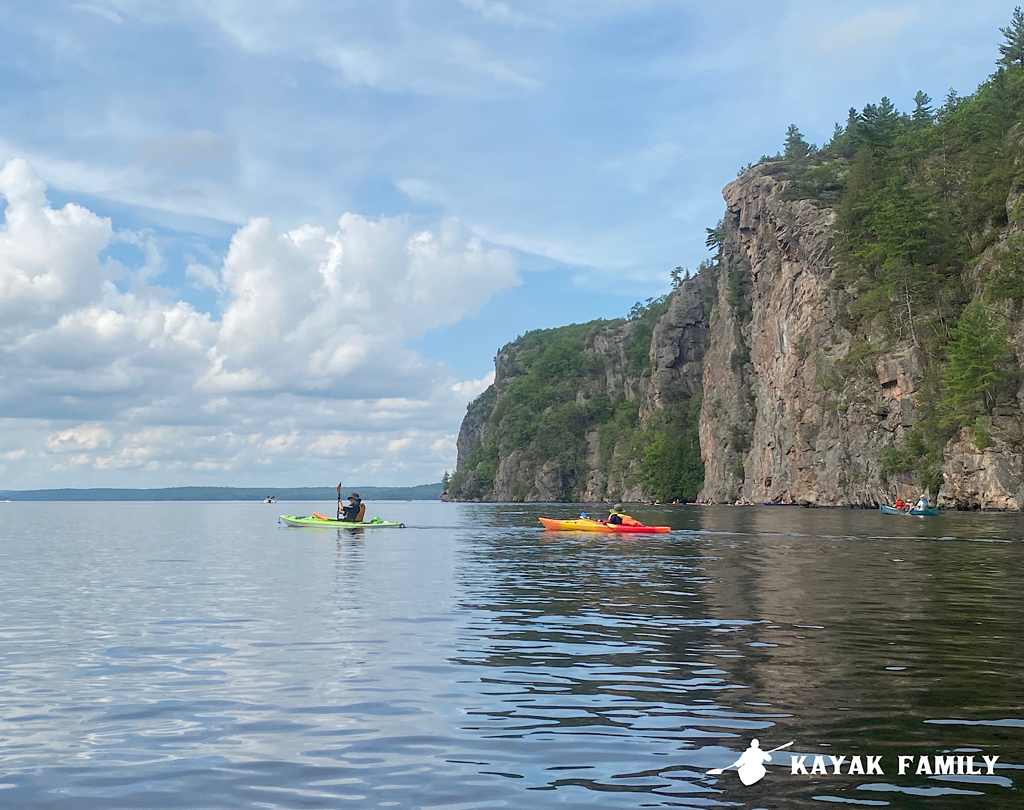 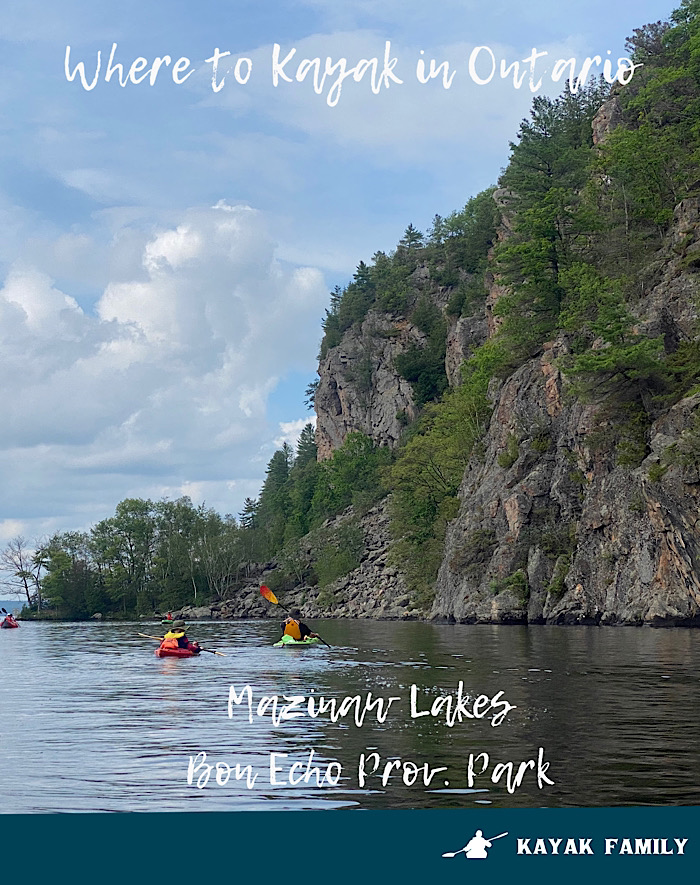