Looking for a spot to launch your kayak along the Grand River? Read on for more details.

We spied several families of Canada Geese along the shore of the river. The goslings are starting to fill out.

Put In: 50 Peel Street, Winterbourne, ON.  The Winterbourne bridge is closed for repairs (or a lack of repairs?), creating a dead end on Peel Street.  We parked on the shoulder of the fairly narrow road.  I was glad that we turned the trailer around when we arrived so that I could just drive out later, as the road was empty in the morning, but there were more cars there by the time we went back later in the day. This wasn't really part of town, but there was private land on both side of the road, but we lowered the kayaks down the slope, kind of like toboggans, and carefully climbed down.  We launched directly under the bridge.

Take Out: 8 Bridge St E, Kitchener, ON  N2K 1J2.  We parked in the YWCA Bridgeport parking lot, and there is a paved path that leads down to the edge of the river directly under the Bridge Street Bridge.
Trip Length: 17 km (approximately 4 hours) 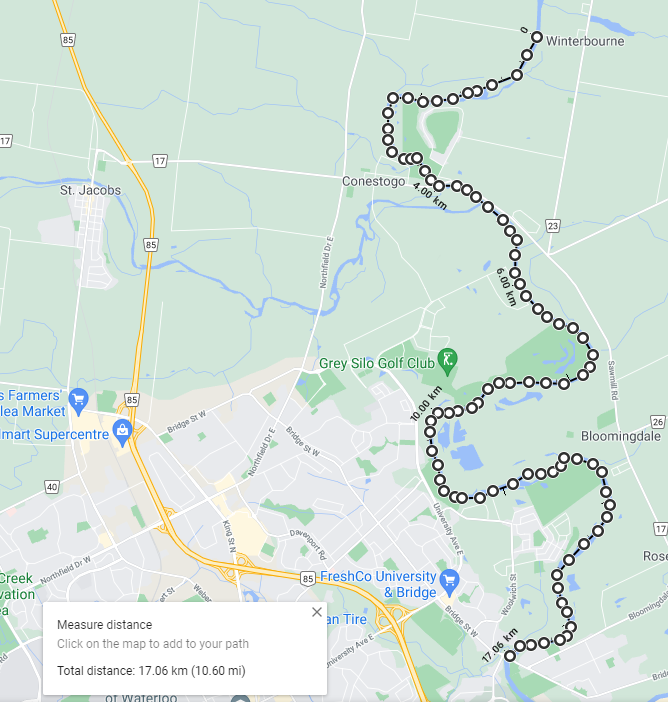 Shuttle Required: Like most river routes, this stretch of the Grand River requires a shuttle, as you are unable to paddle back upstream. You'll need to arrange to leave a car or bike at the put in and at the end. We left a car in Bridgeport, then took our trailer up to the launch point in Winterbourne to begin our paddle. When we finished the trip, we took the car to pick up our trailer, and then we loaded the kayaks on the trailer.

Cost: There were no admission or launch fees.

Degree of Difficulty: Intermediate (while the launch and river are fairly straight forward and there are no swift moving spots, there are shallow sections which may require you to get out of your kayak. You need to be able to re-board in moving water quickly. Please read more below in the Gear Recommendations section and take care if you decide to paddle this section of the Grand.

Life jackets and all Transport Canada required safety gear are always a must. Sunscreen and sun hats are definitely recommended when you're on the water.

Be sure to dress for the water temperatures, not the air temperatures, when paddling in the early spring. Immersion, even for short periods, can be dangerous. A change of dry clothes in a dry bag is a good extra to bring along right in your kayak.

​A throw rope and and extra paddle are always recommended for paddling on moving rivers. 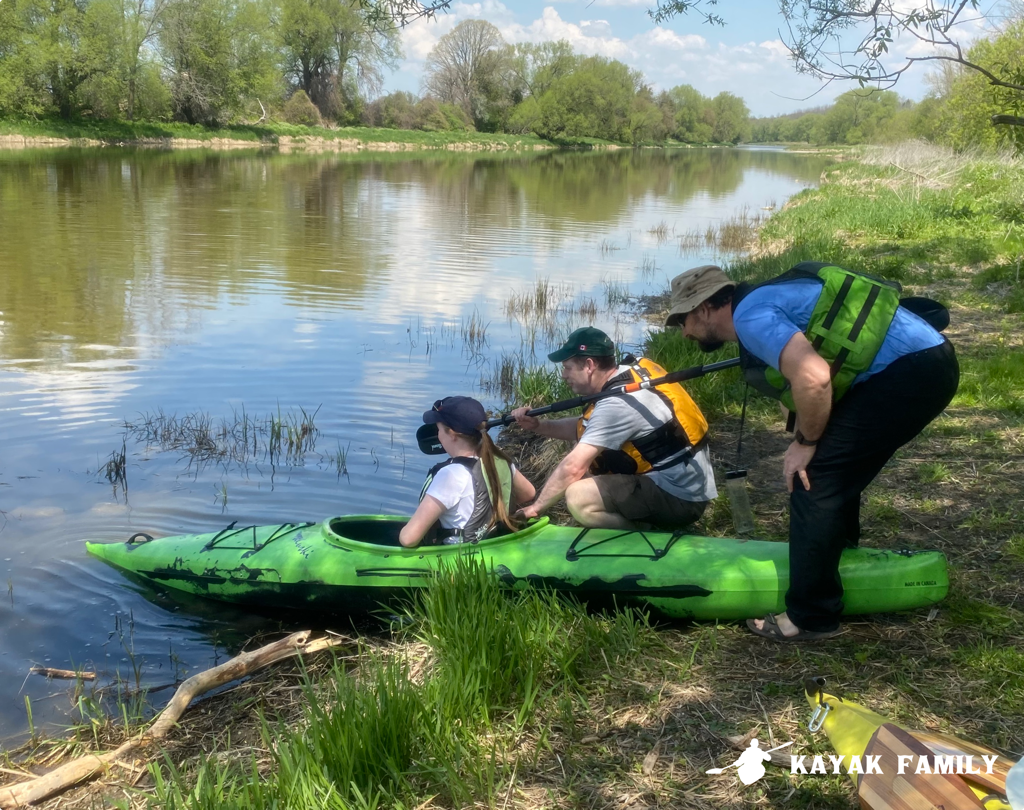 A simple river-side launch into very shallow water under the Winterbourne bridge.

On a beautiful sunny spring day in May, we set out from Winterbourne to paddle down into Kitchener.  Having kayaked from Wilson Flats to West Montrose a few weeks before, we knew that launching at West Montrose would be difficult given that most of the land around the bridge is privately owned, with only a narrow and very steep slope beside the bridge for public access to the river.  We decided that we would try the next launch downstream, at Winterbourne's steel bridge, instead.

Winterbourne, we found out, was not a much easier launch!  With the land on both sides of this bridge also privately owned, we identified one trail that we thought might be public lands, but it involved tobogganing our kayaks down the steep slope - we weren't sure we could carry them (especially the Beast, our bomb-proof Wilderness Systems Pamlico tandem, which weighs in at 85 lbs empty!) without twisting an ankle or worse. 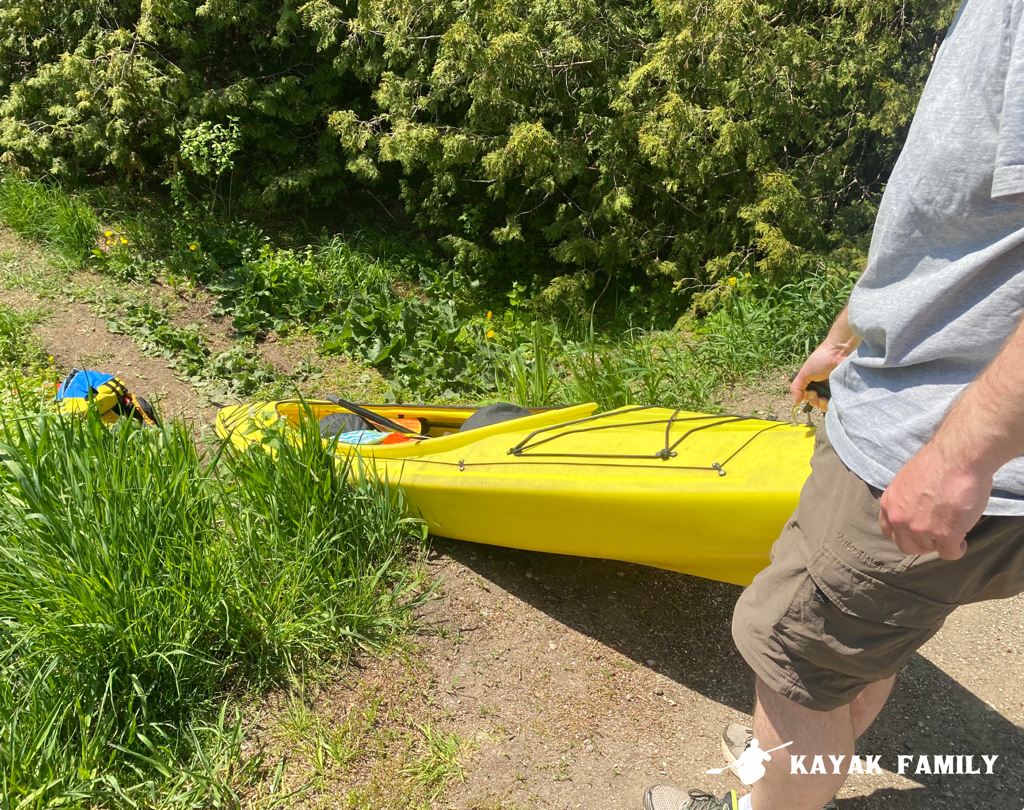 Easy does it! We lowered the kayaks down the shoulder of the road to avoid crossing through private land at Winterbourne.
Getting to the water aside, Winterbourne was a beautiful quiet spot to launch, and we pushed off into the water directly under the bridge, starting out our paddle among the lush farm land and pastures of Old World Mennonite farms.

Winterbourne Bridge was built in 1913, and spans 333 feet across the Grand River on Peel Street, in the (very) small community of Winterbourne.  We were very surprised at just how small Winterbourne is, and also discovered that the bridge is not really IN town.  The properties surrounding the bridge appeared to be farms, and we were probably at least a kilometer from the town.

Like many aging bridges around the Grand, this one has significant heritage but has started to deteriorate.  The bridge is currently closed, but the municipality is working to secure funds to repair it so it can be used for pedestrian and bicycle traffic.  According to the County of Woolwich, this is a two span steel through truss bridge, supported by three concrete pier abutments, making its construction relatively unique and adding to the heritage significance. 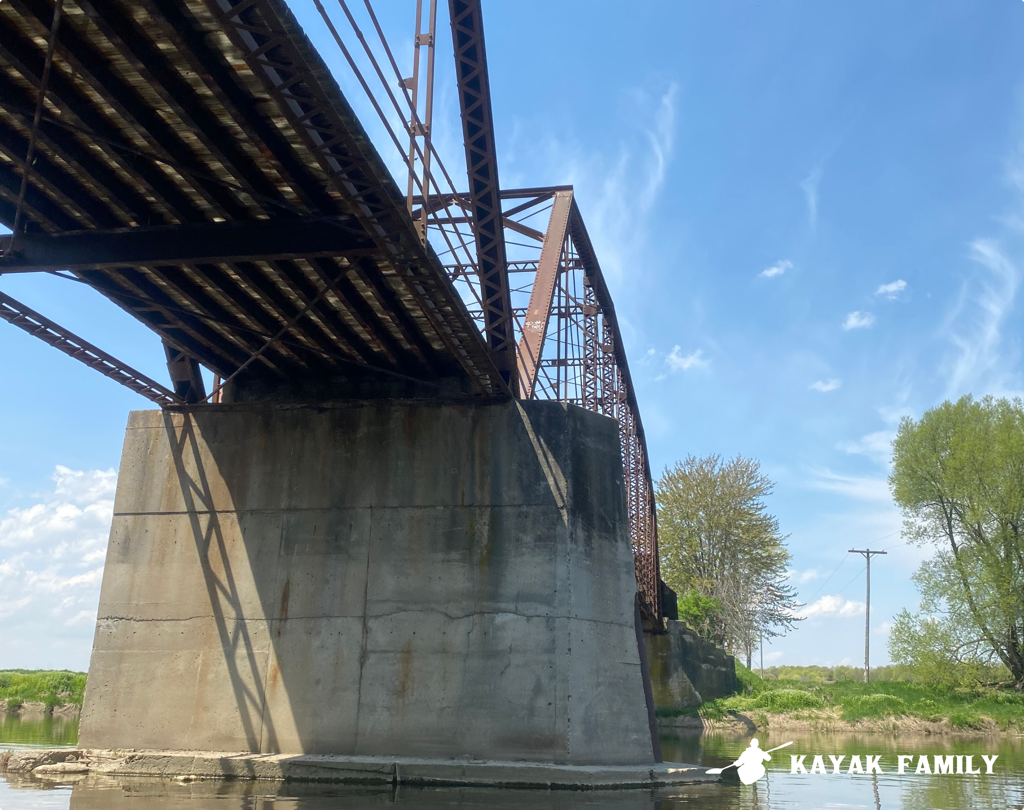 Metal girder bridge spans the river on Peel Street in Winterbourne. The bridge is closed to traffic and pedestrians, but we launched under it.
We stopped about an hour into the trip for lunch on a bank next to a road.  I unfortunately had a bit of a run-in with stinging nettle (when they say stinging, they really mean stinging!) but it was good to stretch our legs out.

Not long after our lunch break, our trip took us through the village of Conestogo, where the Conestogo River feeds into the Grand.  Here, we passed under two small pedestrian bridges.  With golf courses closed due to COVID, I wasn't sure what these bridges, which didn't show up on any of the maps, actually were, and it took a bit of digging to learn that they were part of the Conestogo Golf Club. 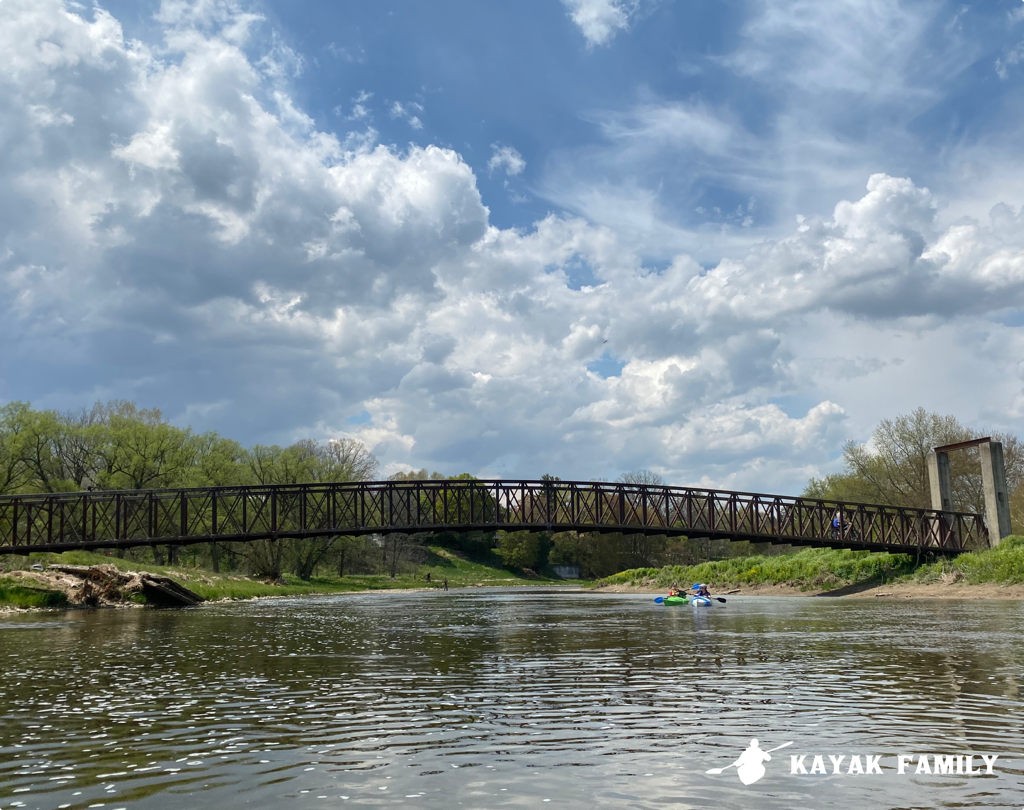 Two metal pedestrian bridges span the Grand River at Conestogo Country Club, owned by Golf North, near the Mennonite community of Conestogo. Note that these bridges are not shown on Google Maps.
Not far after these two bridges, we came to Sawmill Road Bridge, a modern concrete overpass still within the bounds of the village of Conestogo.  This was also an area where we encountered numerous shallow spots.  While smaller lighter kayaks might have made it through, the weighty Beast does ground out fairly easily, so I was in and out a number of times pulling us through to deeper waters.  The cold water felt good on the welts I had from my earlier encounter with the stinging nettle, so no complaints here! 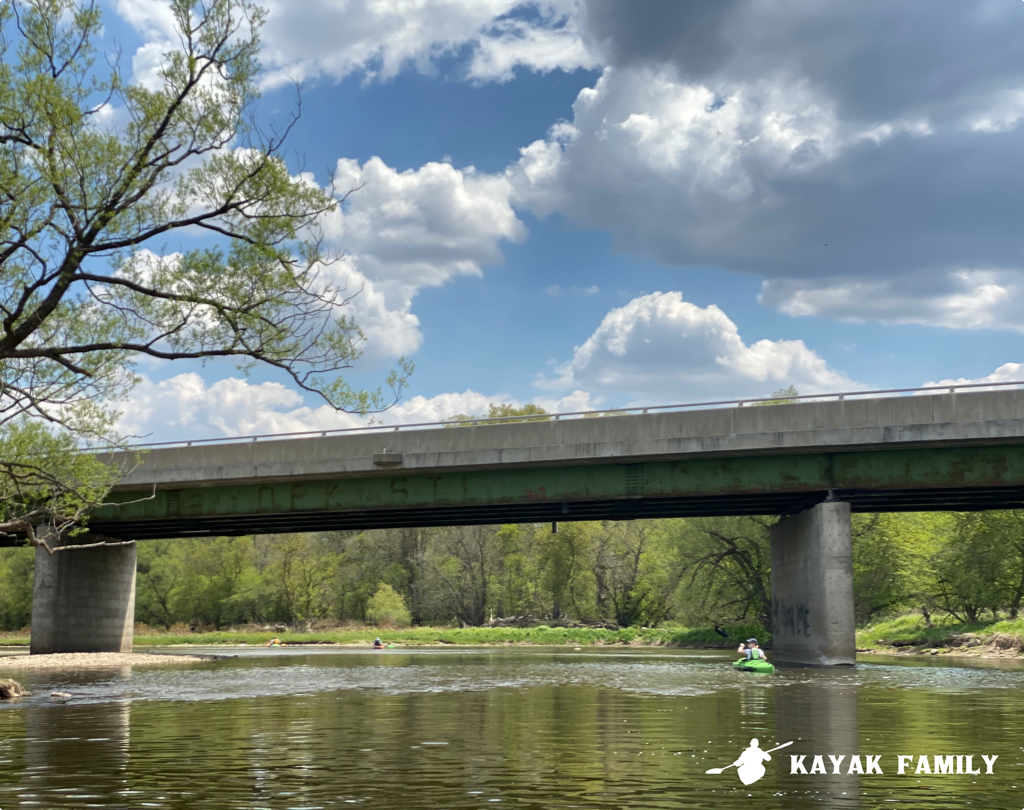 The Sawmill Road Bridge spans the Grand River just after the Conestogo Golf Club's two metal pedestrian bridges. This bridge is 4km (about 1/4 way) into the trip to Bridgeport. 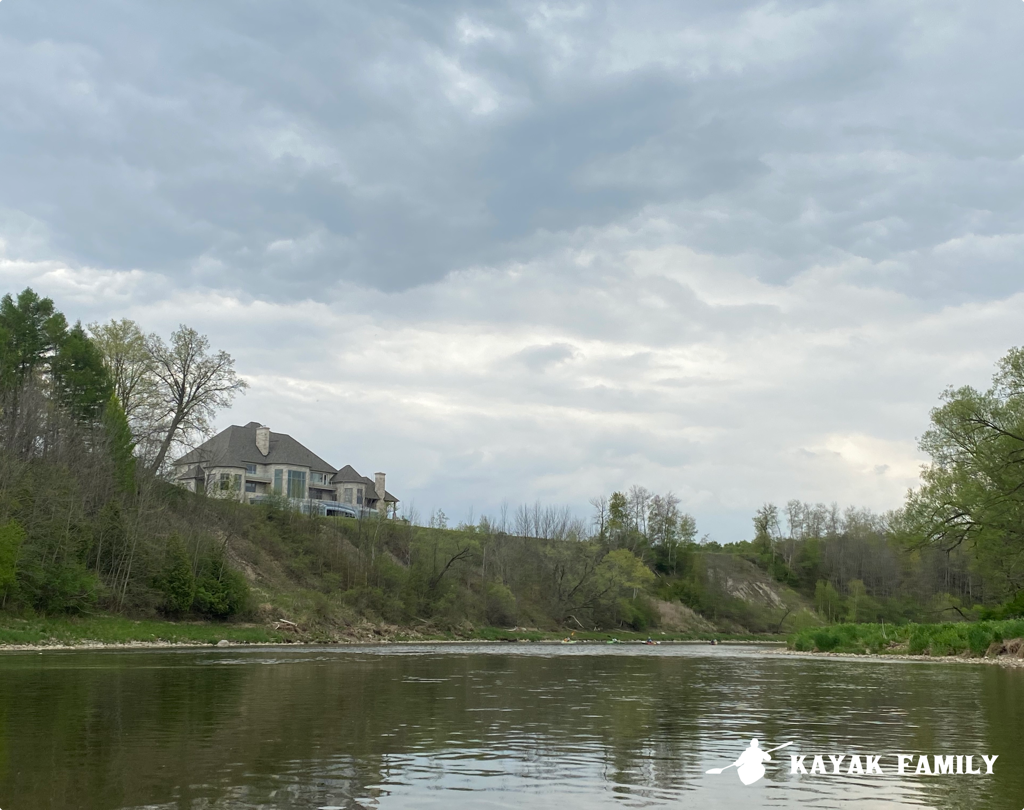 The river got a bit wider and deeper for a bit, with steep banks, and we enjoyed the peaceful country before we got closer to Kitchener.  As we got closer to the city, we saw a lot more back yards and parks and walking trails along the river.  We passed the Grey Silo Golf Course to our right, directly across from Snyder Flats Conservation Area on the left,  On the right, just after Grey Silo Golf Course and still across from Snyder Flats is Kaufman Flats.  This is at the same spot as the Claude Dubrick Trailway on the Walter Bean Grand River Trail, but is also a Grand River Access Point - if you wanted a slightly shorter trip, this could be an alternate take out location. (Address 564 Woolwich Pl, Waterloo, ON N2J 4G8)

We also passed Kiwanis Park (also on the  right), and in this stretch we encountered some early season rafters, as well as some more shallow spots and some wading fishermen along the side of the river!

While we heard more song birds in the early part of the trip, it wasn't until later in the afternoon as we got closer to Kitchener that we saw much besides Canada Geese.  We did have encounters with a few great blue herons, some osprey, and lots of belted kingfishers!
​

Our trip came to an end as we approached the Bridgeport Bridge in Kitchener.  Built in 1934 to cross Bridge Street, this is a 126m five-span concrete bowstring arch bridge, with concrete balustrade handrails.  It is one of the bridges that Waterloo Region has identified in their top 10 heritage bridges, and is a beautiful landmark, easily identifiable from the water!

We pulled out on the left bank, and from there carried the kayaks and gear up a paved path to the parking lot, where we loaded up to go home. 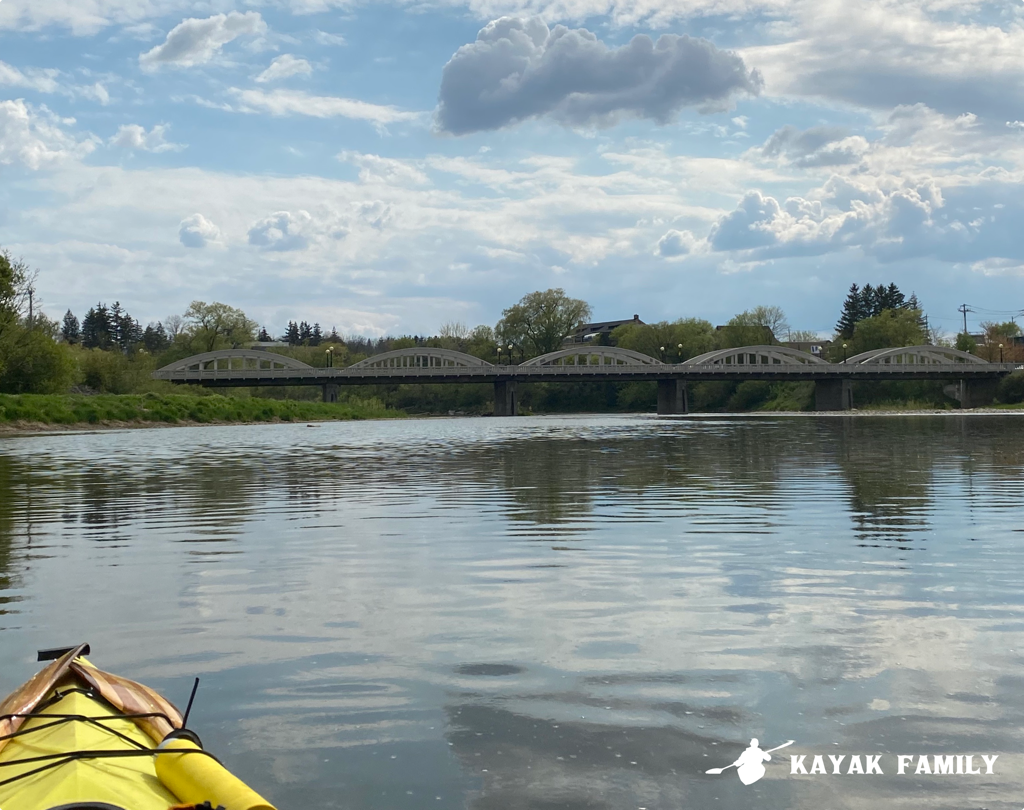 The Bridgeport Bridge in Kitchener crosses Bridge Street. This concrete bowstring arch bridge, constructed in 1934, is easily identifiable from the water, and is a safe and easy spot to get on or off the river.

More information on the Region of Waterloo's many bridges, including years of construction, construction type, location, and more.

The Grand River is serviced by many outfitters.  Some offer shuttles, while others offer rentals or guided trips. 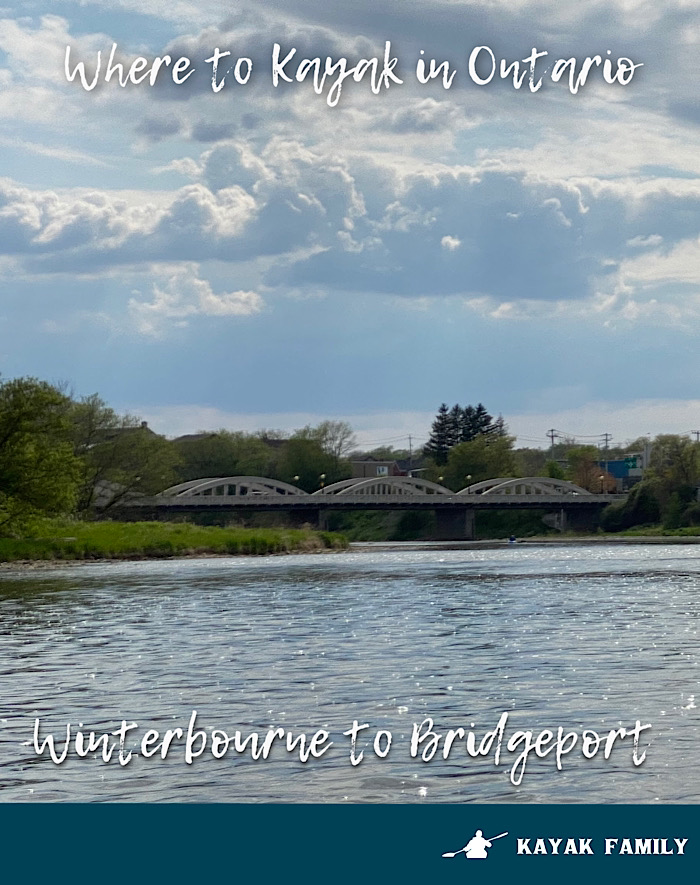